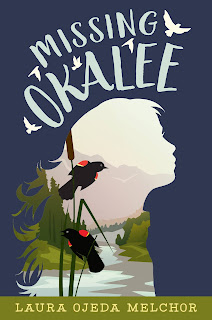 When compared to her nearly perfect little sister, Phoebe Paz Petersen feels she doesn’t measure up in her parents’ eyes. Okalee is smart and beloved for her sunny disposition, but if Phoebe can get picked for the coveted solo in the school choir, she’ll stop being a middle-school nobody and finally get her chance to shine.

The sisters have one very special, secret tradition: River Day—when they hold hands and make their way across the cold, rushing Grayling River to celebrate the first hint of spring. This year’s River Day crossing, however, goes horribly wrong, and Phoebe’s world is suddenly turned upside down.

Heartbroken and facing life without Okalee, Phoebe is more determined than ever to sing the solo in the school concert as a way of speaking to her sister one last time. But Phoebe’s so traumatized by what happened, she’s lost her beautiful singing voice.

Kat Waters wants the solo for herself and is spreading a terrible rumor about what really happened to Okalee on River Day. If Phoebe tells the truth, she fears her family will never forgive her and she may never get to sing her goodbye to Okalee

Missing Okalee is an empathy-building novel about the unbreakable bond between sisters and finding the courage to do what’s right amid heartbreak and tragedy.

I liked the strong bond that Phoebe shared with her sister, Okalee. From the little bits of information that I learned about Okalee, she sounded like a ray of sunshine and someone that I would have liked to have gotten to know better but sadly was not able to.

For being a middle school geared book; I would not have expected the tone of this book to be as dark. What I mean is and as several other readers pointed out is the bullying towards Phoebe. She was just trying to process the lose of her sister and best friend and instead she was getting bullied for a school solo and for not telling the whole truth.

LAURA OJEDA MELCHOR is from Montana and grew up in a Spanish-speaking home that celebrated her family’s Cuban culture. She is a self-described bookworm who graduated with an MFA in Writing for Children and Young Adults from Vermont College of Fine Arts. She lives in Alaska with her husband and son.

“Touching and poignant. Melchor weaves Phoebe’s story of forgiveness and family into a gripping tale of love and loss.”

“Melchor combines grief with guilt for an emotionally intense story about Phoebe, whose sister drowns in a river...Captures the pressures of being an older sister and the unique challenges of losing a sibling. As her perspective matures, Phoebe authentically struggles to imagine other people complexly, leaving plenty of room for significant self-exploration. Meanwhile, many readers will identify with her passion for self-expression through singing. Accessible prose mixed with a candid look at death makes this likely to be popular with reluctant readers. For fans of Jude Banks, Superhero (2021) and other serious middle-grade novels with heart, this is a solid addition to any collection.” 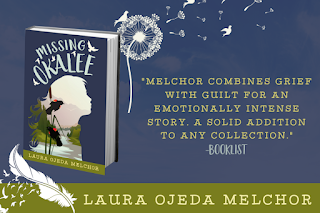