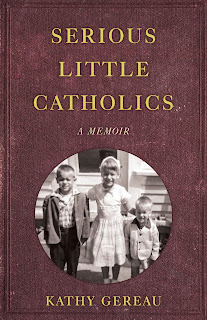 Serious Little Catholics follows Kathy Gereau, the oldest of seven children, as she grows up in the mid-'50s and '60s and makes her way through Catholic school alongside her siblings. Initially, she buys into the mysteries of faith and the litany of rules being spouted by the Sisters of Mercy. But when her fourth grade teacher tells the class that Kathy's sweet little Protestant grandmother would never be admitted into heaven, she begins to question the rigid dogma of the church. Later, she discovers that not all boys are as goofy as her brothers and struggles with the notion that it is a woman's responsibility to discourage men from the plague of impure thoughts. Even an innocent flirtation can sinfully lead men into a temptation they are not capable of resisting; it doesn't seem fair.Ultimately, with the help of her classmates and a few understanding teachers, she learns to laugh at the ridiculous bits of her religion--and discovers the spiritual message within.

I was not raised Catholic but my mom and dad both were. I would hear stories from them about the Nuns. I think they are scarier then the ones in the horror movies. Just kidding (maybe not fully). Although, that is where some of the inspiration from the horror movies probably came from.

So, while I was not raised Catholic I could still somewhat relate to what Kathy was going through while attending school. This book will probably bring back memories for readers who are Catholic or were raised Catholic. You can't help at times laughing at the different encounters with the Nuns.

This is a very real memoir. I like when I am reading a memoir and can really get a understanding of who the person is and what shaped them to who they are now. Kathy does that with her book. Readers of memoirs will want to pick up a copy of this book to check out for themselves.