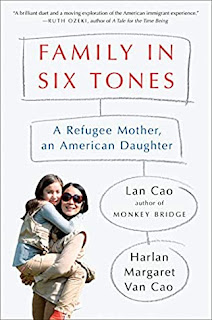 In 1975, a teenaged Lan boarded an airplane in Saigon and got off in a world where she faced hosts she had not met before, a language she didn’t speak, and food she didn’t recognize—all with the faint hope that she would be able to go home soon.
Lan wrestles with her identities as not merely an immigrant but as a refugee from an unpopular war. She has bigoted teachers who undermine her in the classroom and struggles with inner demons, eventually being diagnosed with dissociative identity disorder. But despite these challenges, she fought her way through confusion, and racism, to become a successful lawyer, novelist, and a law professor at Chapman University.
Reflecting and refracting her mother’s narrative, Harlan, an American teenager through and through, describes the rites of passage of childhood and adolescence, filtered through the aftereffects of her family’s history of war, tragedy, and migration. Harlan’s struggles—to fit in in high school, rebound from the loss of her father, and live with her own mental health issues—challenge her mother to step back and let her daughter find her own path—a stark contrast to the Vietnamese way of raising children.
Family in Six Tones speaks both to the unique struggles of refugees and to the universal tug-of-war between mothers and daughters. In their lyrical joint memoir, told in alternating voices, mother and daughter cross ages and ethnicities to tackle the hardest questions about assimilation, aspiration, and family. Through explosive fights and painful setbacks, they search for a way to accept the past and face the future together.

I liked the duo voices of this memoir. In this way, I was able to connect to both Lan and Harlan equally. In addition, there was that strong emotional connection to them as I got to "experience" from each of their different view points.

Although, I was adopted, I was a baby so can't really relate. However, in a way I could as I could imagine I would feel the same way if I had been older when I came over to America. Yet, I did experience some of the racism when I was a young girl. My eyes were made fun of and the kids were mean to me. I am lucky that it was not as bad in my times and that the internet was not big either.

The struggle that Lan felt where Harlan was considered was understandable. She did not want to forget her Vietnamese heritage but at the same time wanted her daughter to be American as well. This was her ying and yang. So reading these parts of Lan's voice and then Harlan's was lovely. Anyone who is a refugee can relate to Lan's story.

Harlan Margaret Van Cao is a recent high school graduate. She was born in Williamsburg, Virginia and moved to Southern California when she was ten. She has a beautiful singing voice and plays the violin and piano. She will be attending UCLA in the fall of 2020 and plans to study economics and philosophy, while also continuing to write.
by Lan Cao Harlan Margaret Van Cao