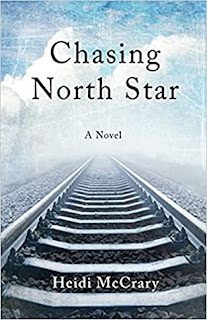 Germany, 1940. While struggling to survive at an orphanage, young Didi crosses paths with a rebellious, quirky girl who will either help her escape a life of abuse and uncertainty or lead her down an even darker path.Fast-forward to 1970. With help from a worn leather journal, another young girl learns the story of Didi, who escaped war-torn Germany for a better life in America―except her life didn’t turn out as expected. The stories of these two girls intertwine and eventually collide one Christmas night when Didi, all grown up, finally remembers the secret she buried long ago.Chasing North Star looks back at a time when four free-range siblings, cigarettes in hand, roamed the streets ’til sunrise and hid from a gun-toting, mentally ill mother who couldn’t help herself. Stingray bicycles, transistor radios, and late nights in the cemetary―just another day in Alamo. That is, until the youngest sibling stumbles upon Didi’s story.

This is a good book but at the same time a hard one to read. Due to the fact that it features mental health illness. Sad because of the effects that someone's illness can play out with loved ones. That person may not intend to hurt their loved ones but they can't help it. Causing a sort of ripple effect. Where children are forced to grow up quickly.

In regards; to this book, I felt like it was a bit one sided with most of the focal point on the nineteen seventies then the forties and Didi. Therefore I was not as connected towards Didi. If her parts had not been featured in this book, it still would have been a good one overall and in my opinion would not have taken anything away from the story. Again, this is because most of the story featured the nineteen seventies.

While mental health is a focal point in this book, it should not be hidden or taboo. People need to talk about it and find the help they need. I would read another book by this author.

Heidi McCrary said…
Thank you for the review of Chasing North Star. I appreciate your thoughtful views. Mental illness indeed has a ripple effect. Thank you again for sharing your review!
October 16, 2020 at 3:19 PM