The Death of Vultures 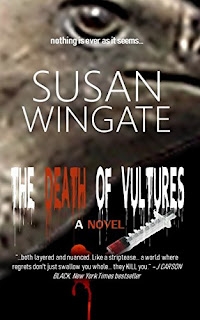 Meg Storm has stepped in it. After becoming entangled within an industry as nefarious as it is criminal, she becomes swept under the riptide in a lurid world of drugs and drug money. With law enforcement at a loss about the island’s escalating trafficking of drugs, authorities opt to use unorthodox tactics. After her daughter, Lily, dies from an apparent heroin overdose, and then her husband, the same way, Meg has nothing left to lose. She transforms herself from housewife into fighting phenom. Will she become a victim, a vigilante, or both? For Meg, nothing is as it seems.

I liked this book a lot. Meg turned into a fighter/survivor by the end of the story. In the beginning, Meg was a mother who had lost her daughter. Her whole world crumbled down around her. She lashed out at her husband; who in turn left her. What Meg didn't know was that her husband was doing his own investigation into the daughter of their daughter. Let's just say "curiosity killed the cat".

The story pitts Meg against her daughter's killers. The battle between them against Meg is pretty even. Which is a good thing as Meg really was the one that brought justice for her daughter. The authorities really took a back seat to the investigation. When it comes to the storyline, it was a good one with engaging characters and a nice ending. If this does not intrigue you to check out this book, I don't know what will.
Susan Wingate