I Invited Her In 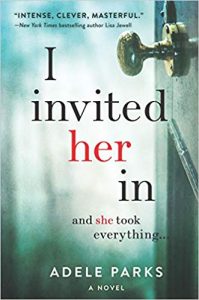 About I Invited Her In

Hardcover: 432 Pages
Publisher: MIRA; Original edition (February 5, 2019)
Imagine the worst thing a friend could ever do.
This is worse.
When Mel receives an unexpected email from her oldest friend Abi, it brings back memories she thought she had buried forever. Their friendship belonged in the past. To those carefree days at university.
But Abi is in trouble and needs Mel’s help, and she wants a place to stay. Just for a few days, while she sorts things out. It’s the least Mel can do.
After all, friends look out for each other, don’t they?
I Invited Her In is a blistering tale of wanting what you can’t have, jealousy and revenge from Sunday Times bestseller Adele Parks.

Adele Parks one of the most-loved and biggest-selling women’s fiction writers in the UK. She has sold over 3 million books and her work has been translated into 25 different languages.
1500+ 5 star reviews have kindly been written by her fans on Amazon.co.uk

She has published 15 novels in the past 15 years, all of which have been London Times Top Ten Bestsellers.
Adele was born in the North East of England, in 1969. She enjoyed a traditional 1970’s childhood, watching too much TV and eating convenience food because nobody minded if kids did that in those days. Since graduating from university, where she studied English Language and Literature, she worked in advertising and as a management consultant. In 2010 Adele was proud to be awarded an honorary doctorate of Letters from Teesside University.

2
Abigail
From the moment Abigail first saw Rob, she had found him completely irresistible. It wasn’t an exclusive club; he was to many. Bad boys often were. That had always been their problem.
Irresistible. Such a silly word. It didn’t get near it.
It tore at her. What she felt for him back then ripped a hole in her and she knew no one could plug it but him.
There were several undergraduates vying for his attention in those early days. Nubile, brilliant, interesting, beautiful young women by the busload. He’d flirted with a whole string of them. At least flirted.
She wasn’t someone who was accustomed to being turned down, to being told no, and she wasn’t prepared to settle for what the others did: heady evenings at the pub, one night of fun and thank you, move on. She had to have him. Make him hers. For real. Forever.
He’d been studying for his PhD when she was just an un­dergrad. He took tutorials. Taught and formed young, willing minds and yet, as he was still studying himself, he was somehow one of them at the same time. He drifted around the university, unique and glamorous, enigmatic and brilliant. There was an element of power, otherness; it was very attractive.
Her body leaned into his when he walked into a room, like a compass pointing north. Her throat dried up; everything else was wet. She pulsed, beat like a huge heart.
It sounded ridiculous these days, so romantic. Too roman­tic. All these years on. But at the time she thought she’d been peeled back, stripped bare. That she wasn’t anything more than a huge, bloody, exposed heart. Beating for him.
It was hard for Abigail to recall that in her current life, that intensity, that certainty. It had been smothered. Years of liv­ing together had normalised them. Respectability and maturity had dampened the fire. Put it out. Layer after layer of ordinary things: shopping for groceries, one telling the other they had food stuck between teeth, listening to overfamiliar stories, wor­rying about promotions, deadlines, accolades, choosing wall­papers and cars. Those things build layers around a pulsing heart—at once protecting it and smothering it.
And the baby thing. And the other women.
Combined, those factors meant it was impossible to recall the unadorned longing, the wanting.
But back then, he was everything. She couldn’t see or think about anyone other. The boys that were buzzing around her, undergraduates, she swatted them away like flies. Rob was seven years older than she was. Enough of a gap to make him seem far more interesting than he probably was. He seemed more confident, knowledgeable, erudite. He was athletic and toned although not overly worked-out. Tall. He took her to fancy res­taurants, the theatre and art-house cinemas.
They talked about politics, novels, travelling. He was fiercely ambitious and focused. She couldn’t deny that ambition and focus had panned out for him. He was, undoubtedly, a success, as he’d always wanted to be, as he’d always said he would be. She couldn’t deny that she’d enjoyed the fruits of his labours. He provided an enviable lifestyle.
When they’d first met and he was messing about with a few undergraduates, he explained to her he was owed a bit of crazy time. He’d not so long since split up from his girlfriend of five years. They’d split because that girlfriend had fallen pregnant and he hadn’t wanted the baby. They’d agreed on an abortion but, afterwards, there wasn’t much hope for them as a couple. They’d both found it hard to move past what had happened to them, past what they’d done. The ex maintained it was an ac­cidental pregnancy. So many pregnancies in those days were. Fertile young people. Rob had never quite believed her story about throwing up the pill after eating a dodgy takeaway. He’d felt trapped. He’d felt the net fasten around him.
“She was just about to haul me onto the fishing boat and bash my brains out,” he’d said laconically, as he pulled on his ciga­rette or took another swig of Merlot. “We simply wanted dif­ferent things.” These words, delivered with a shrug, somehow made it sound as though he was the victim and Abigail ought to feel sorry for him. Which she did.
He did choose her in the end; she became his official girl­friend. It took quite some months. Months of strategising, teas­ing, being in the right place, saying the right thing. But she did it. She was so happy, delirious, although never quite sure why she was the one he’d picked. She wanted to know.
She thought if she knew exactly why he had chosen her, she could maintain whatever it was that had attracted him. If only she could pinpoint it exactly. Yes, she was attractive—she knew it then and she remembered it now—but many of them had been attractive. She was also buoyant and independent and confident.
Those things were harder to recall.
Maybe, she was simply the most persistent. The last woman standing.
Or just the most foolish.
Maybe the others got bored of his petulance, his pretentious­ness, his unwillingness to commit. They settled for nice guys in their own year, even if those boys thought a great night was eat­ing pizza from a box while watching Futurama. One day those boys would talk about political affairs and Booker winners. Ev­eryone grows up eventually.
So that was what it was. She saw it clearly now. Her twenty-year commitment began on the back of another woman’s heart­ache.
Excerpt Tour Stops