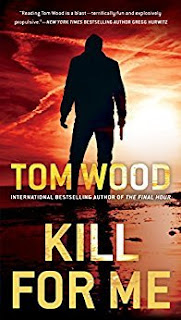 Lethal assassin Victor lands in the middle of a Guatemalan cartel war in the latest nonstop thriller from the international bestselling author of The Final Hour.

Victor is the killer who always delivers...for the right price. And Heloise Espinosa, patron of Guatemala's largest cartel, is ready and willing to pay him just that to eliminate the competition--her sister. Heloise has been battling Maria for control of the cartel in an endless and bloody war. Now Victor decides who survives. An easy job if it weren't for the sudden target on his back.

Victor's not the only one on the hunt. Someone else has Maria in their crosshairs and will do anything to get the kill. In the middle of cartel territory with enemies closing in from all sides, Victor must decide where to put the bullet before one is placed in his head. His only chance at survival is to team up with the one person who may be as deadly as he is...


I jumped into the middle of this series with book five. That book was an instant hit with me and since than, I can't get enough of Victor. When I get my hands on the latest book in this series, I can't read the book fast enough. Mr. Wood is one of my favorite authors. If you are a fan of a strong, male lead, great storylines, and plenty of kick ass action than, you need not look any further then this series. So pack your passport and strap in for the ride of your life!

Victor is the "Bryan Mills" of this series. You can't go wrong with this. If Victor is hunting you down and you live to tell about it. That is only because he let you survive. Additionally, beware a sister's scorn. Sisters, Maria and Heloise are two women that you don't want to piss off. They will slit your throat without blinking an eye.

As I said before, I can't read these books fast enough. There was so much action and killing happening but don't worry as the only thing you will get lost in is the story. In the end, Victor made have some out with some wear and tear but nothing that will keep him down for too long. Kill for Me punches you in the teeth will taking you on a roller coaster ride of action packed intensity!