Brother John: A Monk, a Pilgrim, and the Purpose of Life 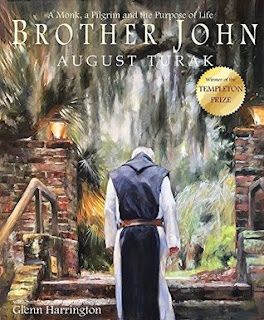 Recipient of the prestigious Templeton Prize, Brother John is the true story of a meaningful encounter between a man going through a mid-life crisis, and an umbrella-wielding Trappist monk. This magical encounter on Christmas Eve eventually leads the author, and us all, to the redemptive power of an authentically purposeful life.
Uplifting, deeply moving, and set in the magnificent Trappist monastery of Mepkin Abbey, Brother John is dramatically brought to life by over twenty full color paintings by Glenn Harrington, a multiple award-winning artist.
Brother John's inspirational message takes place at Christmastime, and its inspirational message and rich illustrations are sure to bring the reader back again and again throughout the year.
My Review
A man is waiting for Mass to begin. It is his second Christmas retreat at Mepkin Abbey monastery. He has kind of lost his way in life. Yet, he doesn't really know or realize it until after encountering Brother John. Brother John does not speak much like God. God does speak but you have to be ready to listen.
Brother John offered a little piece of comfort to the man when the man walks out of the church to find Brother John waiting with his umbrella to walk people back through the rain to their rooms. This nice gesture was accepted but it also unsettled the man. He shares his concerns with Father Christian. Father Christian tells of a story of a minister. The man reflects on the following:
On close inspection, so much of our indecisiveness concerning life's purpose is little more than a variation on the minister's so-called theological doubts. Ultimately, it is fear that holds us back, and we avoid this fear through rationalization. We are afraid that if we ever did commit to emulating the Brother johns of the world, we would merely end up like the Presbyterian minister: pulled apart between the poles of how we are living and how we ought to live and unable to look away.
We are afraid that if we ever did venture out, we would find ourselves with the worst of both worlds. On one hand, we would learn too much about life to return to our comfortable illusions, and, on the other, we would learn too much about ourselves to hope for success.
However, in our fear, we forget the miraculous.
One final thought:
Brother John loves God so much that he doesn't know what to do with himself, so he stands outside on a cold Christmas night with an umbrella, waiting. Waiting to offer us some protection and human comfort on our long journey home.
Whatever faith you are, you will appreciate the message in this book. The illustrations are breathtaking. They really helped to bring the story to another level.
About the Author:
August Turak is a successful entrepreneur, corporate executive and award-winning author who attributes much of his success to living and working alongside the Trappist monks of Mepkin Abbey since 1996. As a frequent monastic guest, he learned firsthand from the monks as they grew an incredibly successful portfolio of businesses. Service and selflessness are at the heart of the 1,500-year-old monastic tradition's remarkable business success. It is an ancient though immensely relevant economic model that preserves what is positive and productive about capitalism while transcending its ethical limitations and internal contradictions. Combining case studies from his thirty-year business career with intimate portraits of the monks at work, Turak shows how Trappist principles can be successfully applied to secular business settings and to our personal lives as well. He demonstrates that monks, people like Warren Buffett and other "transformational organizations" are successful not despite their high principles but because of them. He lives in North Carolina.
August Turak