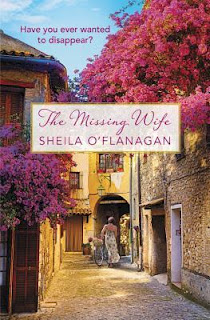 HAVE YOU EVER WANTED TO RUN AWAY?
When Imogen Naughton vanishes, everyone who knows her is shocked. She has a perfect marriage. Her handsome husband treats her like a princess. She's always said how lucky she is. So why has she left? And how will she survive without Vince?

What goes on behind closed doors is often a surprise, and Imogen surprises herself by taking the leap she knows she must. But as she beings her journey to find the woman she once was, Imogen's past is right behind her...

Will it catch up with her? And will she be ready to face it if it does?

I thoroughly enjoyed this book. Imogen had a story to tell that was worth listening to. I liked that Imogen grew into a strong, independent woman. she did not stay a shy, timid woman for long. Getting to experience everything through Imogen's eyes was an intriguing experience. As Imogen was starting over, everything that she did, saw, and the people that she met was great. Which speaking of people, I am glad that none of them criticized Imogen for her actions but instead were kind. The more I got to know of Imogen, the more I applauded her for her courage to leave her husband. He was controlling and manipulative.

This is such an enjoyable read. I got lost in the story, the characters, and the beautiful location. A quick read. One that I was sad was over so fast. This book had bits of a psychological thriller. The Missing Wife is not one to miss for 2018! I can't wait to see what the author comes out with next.
Sheila O'Flanagan