The First Kiss of Spring 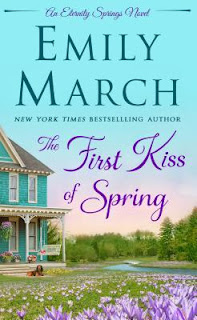 When Josh Tarkington gets stuck on a gondola with the lovely Caitlin Timberlake, he thinks his consistently bad luck might have changed.

After their blossoming romance is interrupted, Caitlin realizes that her encounter with Josh was a sign that she needed to make a major life change. So she packs up her things and moves to Eternity Springs, opens a day care, and sets her cap for the town’s mechanic—Josh.

But Josh is hiding a well of secrets that would ruin him, and his relationship with everyone in Eternity Springs—especially Caitlin. When tragedy strikes, Josh and Caitlin find themselves, and their relationship, tested beyond imagining. Will they be able to find their way back to each other?

I liked the town of Eternity Springs. It was charming. I got a good mental image of the town. Yet, it was not hard to image when there was mention of Telluride and Denver. Both places that are just either a couple to four hours away from where I live.

When it came to Josh and Caitlin, it was Josh that I connected with the most. Caitlin was fine but I would call her more of a casual acquaintance. Yet, I did feel a little bad for her as her parents were evil. They were mean.

At the beginning of each chapter was a journal entry. These entries told a lot and gave a up close and personal look at the character. I say "character" because it was not really known who was writing them...Josh or Caitlin. In the end it was revealed that it was Caitlin. However, I thought it was Josh pouring out his soul about his troubled childhood. Overall, this was just an alright read for me.
Emily March