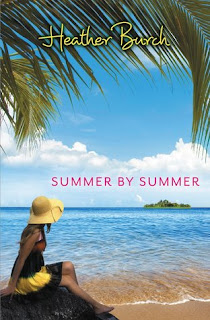 When Summer took a job as a nanny for a couple vacationing in Belize, she imagined it would be a fresh start before starting college in the fall. And while she adores her charge, Josh, she can’t say the same for her employers’ oldest son, Bray. He’s cocky, inconsiderate, and makes her feel she’s a chore he has to put up with. In short, he’s everything she dislikes in a guy.

Bray had a plan for the summer: party, hang out with friends, and forget all the responsibilities waiting for him back home. But every time he’s forced to be around Summer, her dour, serious mood sets him off. Not to mention she has a habit of picking up on what he already knows is wrong with him.

Then the two find themselves on a dive trip gone wrong, stranded on a remote island. As they focus on survival, their differences melt away, and they find being together may be what both needed all along.

My Review
To be honest if you asked me to put this book in a category I would never say Christian Romance or anything Christian related. Not to say that this is a wrong thing to say a book is Christian as I am one and have read many books in this category. I just would never think this about this book. This is because usually when I think Christian I am looking for the story to give me a message or to have some mention of faith, God, etc. None of this was found in this book. Again not a bad outcome as I still enjoyed reading this book. In fact, it was a quick read.
I was pleasantly happy that Summer and Bray were charming. In the beginning I was not sure about Bray. I thought he was just going to walk around with a chip on his shoulder the whole story. Then Summer I thought would be just a love interest but would not bring much to the story. I was wrong. Bray was charming but also a sweetheart. Summer was strong. The romance between them was sweet. This book kind of made me think of the Blue Lagoon but for the modern day.
Heather Burch