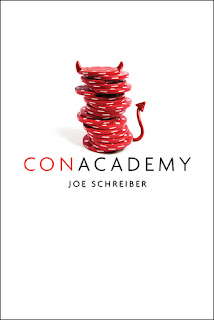 It's his senior year and Will Shea has conned his way into one of the country's most elite prep schools. But he soon runs into Andrea, a fellow con-artist. With the school not big enough for the both of them, they make a bet that whoever can con Brandt Rush, the richest, most privileged student in the school out of $50K, gets to stay at the school. Will starts setting up his con (an online poker scam) with his uncle who's one of the best grifters in the business, but also with the unwanted help of his father. The plot thickens as Will starts falling for fellow student Gatsby, and some of Will's lies start to catch up with him. In this twisty tale of scams, secrets, lies and deception, it hard to figure out who's conning who!

I picked up a copy of this book because it sounded intriguing. When the book arrived and I read a reference to Ocean's Eleven I got really excited. The Ocean's movies were great. With each movie I would try to figure out the con and how it was pulled off before the reveal at the end of the movie. This book had none of the same cool moments or intrigue as the Ocean's movies.

Will and Andrea were fine but neither one made me really cheer for one over the other. Their target was not anyone that I cared for at all. This was supposed to be the point so that as Will and Andrea each were trying to top the other one, me the reader would say that the target got what he deserved. Which by the way I did say this and meant it as well. The con was nothing too elaborate which I was looking forward too. Overall, this book was alright.
Joe Schreiber