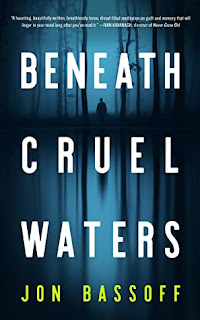 Holt Davidson, a Kansas firefighter, hasn’t been back to his hometown of Thompsonville, Colorado, for more than two decades, but when he learns that his estranged mother has taken her own life, he returns for the funeral, hoping to make peace with her memory. He spends the night at his childhood home, rummaging through each room, exploring the past. But instead of nostalgic souvenirs, he discovers a gun, a love letter, and a Polaroid photograph of a man lying in his own blood.

Who is the dead man? Was his mother the one who killed him, and, if so, why? Who sent the love letter? And what role did his sister, institutionalized since she was a teenager, play in this act of violence? As his own traumatic memories begin to resurface, Holt begins an investigation into his mother’s and sister’s pasts—as well as his own.A wrenching psychological thriller in the vein of Tana French’s In the Woods, Jon Bassoff’s Beneath Cruel Waters reminds us that the sins of the mothers are the sins of the sons.

This is the second book I have read by author Mr. Bassoff. This one is totally different from the first book I read, Captain Clive's Dreamworld. Yet, it shows what a versatile author Mr. Bassoff is. Readers looking for their next great psychological thriller need not look any further than Beneath Cruel Waters!

The beginning starts out with a literal bang. From there the reader is taken on a dark, twisty path that gets more complex. Just when you thought you might have the story figured out, Mr. Bassoff comes out swinging with some surprises. While, I was reading this book, it was like a movie playing in my head. Don't miss this book that readers will be talking about.