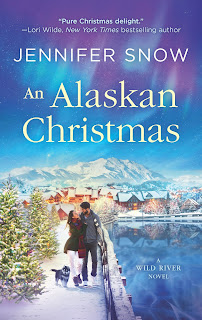 In Alaska, it’s always a white Christmas—but the sparks flying between two reunited friends could turn it red-hot…


If there’s one gift Erika Sheraton does not want for Christmas, it’s a vacation. Ordered to take time off, the workaholic surgeon reluctantly trades in her scrubs for a ski suit and heads to Wild River, Alaska. Her friend Cassie owns a tour company that offers adventures to fit every visitor. But nothing compares to the adrenaline rush Erika feels on being reunited with Cassie’s brother, Reed Reynolds.


Gone is the buttoned-up girl Reed remembers. His sister’s best friend has blossomed into a strong, skilled, confident woman. She’s exactly what his search-and-rescue team needs—and everything he didn’t know he craved. The gulf between his life in Wild River and her big-city career is wide. But it’s no match for a desire powerful enough to melt two stubborn hearts…

This first book in this series rom author, Jennifer Snow is off to a great start. I loved this book. Reed and Erika were great. Although, so was reed's sister, Cassie and a hidden star in Diva, the narcoleptic dog. I mean, what more could you ask for...a narcoleptic dog! Yes, please.

Erika started out with her hair up, expensive clothing, and a stuck up attitude but by the end of the story she had let her hair down, not afraid to get her hands dirty and found love in her heart. She and Reed were great together. Their first scene together was both hot and funny. Hot due to the make out session between these two and funny because after Erika took lead, she told Reed that he was "just ok". Luckily, things got better for Reed as he did win Erika's heart.

Maybe it was the cold Alaskan nights or the engaging characters but An Alaskan Christmas is a book that you will want to make sure is in your Christmas stocking this year! This book is sure to be on Santa's "good" list.

Jennifer Snow writes contemporary romance fiction for Grand Central Publishing and Harlequin. Her stories range in heat level from sweet to sexy and are set everywhere from big cities to small towns. Her books are light and humorous, but also full of heart, featuring families and communities readers love to visit over and over again.


Originally from Newfoundland, Canada, she now resides in Alberta with her husband and son and three mischievous cats. She is a member of RWA and the Alberta Writers Guild.
She currently publishes psychological thrillers under her pen name J.M. Winchester and writes screenplays and TV shows in her ‘spare’ time.


More information can be found on her website at www.jennifersnowauthor.com
You can also find her at http://www.twitter.com/@jennifersnow18 and http://www.facebook.com/jennifersnowbooks/.
EXCERPT
A fuzzy memory of being the one Reed put to bed flashed in Erika’s mind and her cheeks flamed. He’d carried her inside…had she cuddled into him? Yep.
Just focus on the dog. “What happened?”
“She’s narcoleptic. She could be out for a minute or an hour.”
Was he kidding? “A narcoleptic dog?”
“Yep.”
Okay then…
“I brought you coffee and breakfast,” he said, open ing the paper bag.
“Why?” Glancing down, she saw her nipples point ing through the fabric of her thin tank top. She folded her arms across her body. Her bra was draped over the back of the couch. She hadn’t expected visitors.
Reed picked up a coffee and closed the gap between them in two easy strides. “Because, I told you last night that I’m not the kind of guy who has sex with a woman and then doesn’t call.”
Her mouth gaped. No freaking way. It had just been a dream. “We…no…there’s no way…” She shook her head, but a flashback of him laying her down on Cassie’s couch the night before had her panicking slightly.
Nope. There was no way. She was sticking with that. “We didn’t.”
But her confidence wavered as he grabbed her hips and pulled her closer. “Final answer?” The intensity in his blue eyes made her shiver. His soft, manly smell ing cologne made her mouth water slightly as her body stiffened. Shit, if they had, she just might not regret it…
Reed grinned. “You’re right, we didn’t.”
She pushed him away and reached for the coffee. “I knew that.” She took a desperate sip, the hot liquid scorching her tongue and the back of her throat as she forced it down.
“You kissed me, that’s all,” he said with a shrug, opening the bag and taking out a plastic-covered con tainer.
She scoffed. “You’re so full of sh…” Oh crap, she had kissed him. Reality had somehow blended with her dream, but she was starting to distinguish between the two. She had kissed him. And it was a fantastic kiss… “Oh, that was nothing… And so completely out of char acter for me.” Damn, she’d really let her guard down the night before.
“Why? Because I’m just a bartender and you’re a brilliant, beautiful surgeon?”
Her cheeks flamed, her mind still caught on beauti ful. Ignoring the question, she reached for the plate of food piled high with scrambled eggs, bacon, sausages and toast, but he pulled it back out of reach.
“This is mine.” He took out a small container of what looked like oatmeal and handed it to her. “You said last night you only ate ‘clean’.”
She’d said that? Man, she must have sounded like a complete holier-than-thou asshole. His breakfast looked so good and the greasy food was exactly what she was craving that morning, but she squared her shoulders and accepted her fate. She could always head out for a second breakfast once he left. “The oatmeal’s per fect.” She opened it and, grabbing the plastic spoon, she forced herself not to gag on it. She normally skipped breakfast and sometimes lunch with her busy sched ule. But she was on vacation and she planned to eat. A lot. And the faster she could get rid of him, the faster she could get to the breakfast diner on Main Street.
Reed grinned, watching her put another spoonful of the thick, tasteless gunk in her mouth. “Good?”
“Delicious.”