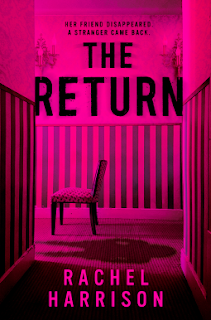 A group of friends reunite after one of them has returned from a mysterious two-year disappearance in this edgy and haunting debut.Julie is missing, and no one believes she will ever return—except Elise. Elise knows Julie better than anyone, and feels it in her bones that her best friend is out there and that one day Julie will come back. She’s right. Two years to the day that Julie went missing, she reappears with no memory of where she’s been or what happened to her. Along with Molly and Mae, their two close friends from college, the women decide to reunite at a remote inn. But the second Elise sees Julie, she knows something is wrong—she’s emaciated, with sallow skin and odd appetites. And as the weekend unfurls, it becomes impossible to deny that the Julie who vanished two years ago is not the same Julie who came back. But then who—or what—is she?

OMG. I am so royally disappointed in this book. I had really high hopes for it. Yet, it was a "sleeper". There was nothing interesting about this book or the characters. In fact, I did not like any of the women.

I found it hard to believe that none of them really questioned what was happening to them or why Julie was acting so different from her prior version of herself. Not just in the mannerisms but also in her appearance.

The events that took place within this story were on a "goosebumps" level. Nope, nothing scary about that. As much as I did not like the characters or found the lack of "horror" in the story I was determined to finish this book. It did not get better and the ending was as sad.
Rachel Harrison

clarabenet90@gmail.com said…
Beta-readers are indeed extremely important in your process. They will catch mistakes even you or a proofreader didn’t catch, and give amazing tips on how to develop further your story. I used https://honestbookreview.com to get a few reviews and also promote my book. Hopping to be in the top 100 genre lists and see better sales this Christmas season…
December 22, 2019 at 4:00 AM