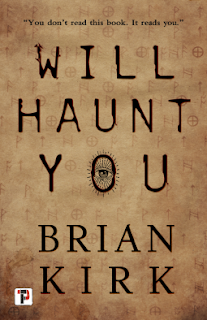 You don't read the book. It reads you.

Rumors of a deadly book have been floating around the dark corners of the deep web. A disturbing tale about a mysterious figure who preys on those who read the book and subjects them to a world of personalized terror. Jesse Wheeler--former guitarist of the heavy metal group The Rising Dead--was quick to discount the ominous folklore associated with the book. It takes more than some urban legend to frighten him. Hell, reality is scary enough. Seven years ago his greatest responsibility was the nightly guitar solo. Then one night when Jesse was blackout drunk, he accidentally injured his son, leaving him permanently disabled. Dreams of being a rock star died when he destroyed his son's future. Now he cuts radio jingles and fights to stay clean. But Jesse is wrong.The legend is real--and tonight he will become the protagonist in an elaborate scheme specifically tailored to prey on his fears and resurrect the ghosts from his past. Jesse is not the only one in danger, however.By reading the book, you have volunteered to participate in the author's deadly game, with every page drawing you closer to your own personalized nightmare.The real horror doesn't begin until you reach the end. That's when the evil comes for you.

It is funny as I was struggling with this book and kept putting it down after a few chapters not really able to put my finger on what the issue was. I knew that the one thing was that I  could not connect or cared for the characters including the main lead Jesse. It was not until I read a few other readers thoughts that I realized what the problem was. Which, I don't typically read reviews until after I have read the book.

The problem is that the way the characters voiced their thoughts was not in full sentences. It was short and choppy. I might have been able to excuse this style of writing if I had been more into the overall book. As I stated this book did have elements of being a good horror book. It is dark and the transformation that Jesse experienced could give you nightmares. A good idea that was not executed as well in the end.


If you want to check this book out for yourself, request a copy on Netgalley.
Brian Kirk