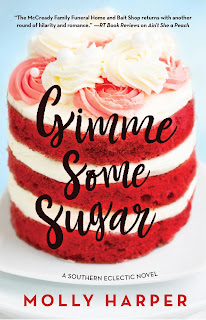 Book description
Lucy Brewer would never have guessed that her best friend, Duffy McCready (of McCready’s Bait Shop & Funeral Home) has been in love with her since they were kids. Fear of rejection and his own romantic complications prevented Duffy from confessing his true feelings in high school, so he stood by and watched her wed Wayne Bowman right after high school. Wayne had always been a cheapskate, so it comes as no surprise when he suffers a fatal accident while fixing his own truck.
Even as her family and friends invade Lucy’s life and insist that the new widow is too fragile to do much beyond weeping, Lucy is ashamed to admit that life without Wayne is easier, less complicated. After all, no one knew what a relentless, soul-grinding trudge marriage to Wayne had been. Only Duffy can tell she’s hiding something.

In need of a fresh start, Lucy asks Duffy to put his cabinet-building skills to use, transforming the town's meat shop into a bake shop. As the bakery takes shape, Lucy and Duffy discover the spark that pulled them together so many years ago. Could this finally be the second chance he’s always hoped for? 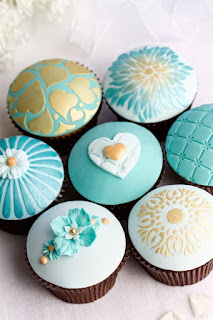 
This is the first book I have read in this series. It can be read as a stand alone novel. I had such a fun time reading this book that I plan to go back and read the prior two novels in this series.

There were so many engaging and friendly characters in this book. There is Lucy and her son, Sam, Duffy and his eccentric grandma, Tootie, and Prince. They all held a place in my heart. Sam's child wonderment was infectious. Tootie kept things interesting and the romance between Lucy and Duffy was sweet but hot at the same time. Not to be missed is Prince. Any dog that can rock pink toenails with a name of Prince Sparkle Cupcake is a winner in my book.

You know you are in for a fun read when the book starts with Lucy holding an eighteen inch penis cake for a bachelorette party. If you are looking for a sweet treat to get your hands on than, pick up a copy of Gimme Some Sugar by Molly Harper. 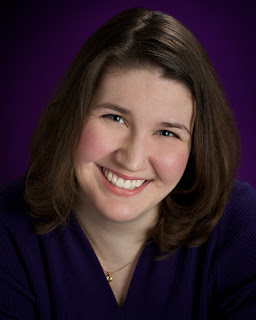 About the author
Molly Harper is the author of two popular series of paranormal romance, the Half-Moon Hollow series and the Naked Werewolf series. She also writes the Bluegrass ebook series of contemporary romance. A former humor columnist and newspaper reporter, she lives in Michigan with her family, where she is currently working on the next Southern Eclectic novel. Visit her on the web at MollyHarper.com.


Excerpt
“Hey, let me help you with that!”
She turned . . . and screamed internally to see Duffy McCready jogging down the sidewalk of Main Street.
Duffy had been her very best friend in elementary school. She’d neglected friendships with the girls in their grade so she could play trucks in the sandbox with Duffy. She shared the Goo Goo Clusters in her lunchbox with him and only him. And in high school, well, she’d harbored a secret crush on him that reduced her to some very embarrassing diary entries, not to mention late-night-call impulses that made adult Lucy very grateful Pete Bowman had never allowed his teenage daughter a cell phone. Duffy had been one of her favorite people on the planet for years and she was so glad to reconnect with him after their years-long separation. But Holy Lord, right now, she wanted him to either go away or go blind.
Temporarily.
She wasn’t evil or anything.
With the ladies-who-lunch crowd back in Texas, this was the sort of thing she would brazen her way through—smile, laugh it off, pretend it was a big joke. But this was Duffy McCready, her
Lake Sackett Achilles’ heel.
Duffy moved to take the keys from her while Lucy tried to angle the box out of his line of sight. This brought her closer to Duffy’s tall frame as he hovered over her to work the lock. Between the warmth radiating off of his body and the smell of leather and cinnamon gum, Lucy had to brace herself against the brick to keep her knees from giving way.
Settle down, girls, she warned them. That way lies madness and tears and a crazy ex-wife who tried to push you down the stairs in high school.
Her knees argued that it had been a very long time since she’d been so close to a nice-smelling man. And Duffy was a reliable, emotionally stable sweetheart who wouldn’t mind a sniff or two between friends. Her knees were a very bad influence.
Duffy grunted and managed to flip the key in the ancient lock. He turned to smile at her, his face only inches from hers. Her breath caught as she got her very first look at adult Duffy up close, and her knees were now giving her very bad ideas. Her childhood friend had turned into a hunk of something.


I have 1 copy to giveaway. US only. Leave a comment with your email address and also head over to my Instagram post for more ways to enter. Winner chosen April 9th.
Molly Harper

traveler said…
This story sounds delightful, captivating and interests me greatly. The characters sound authentic as does the storyline. Thanks for this lovely feature and giveaway. saubleb(at)gmail(dot)com
March 31, 2019 at 2:18 PM

petite said…
I would enjoy this book as it is a departure from my heavy reading. Many thanks. elliotbencan(at)hotmail(dot)com
March 31, 2019 at 2:34 PM