Order your copy of Red Hotel 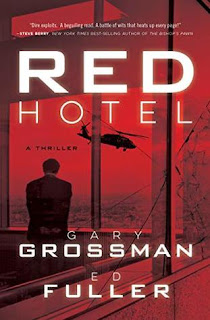 When a bomb rips the façade off the Kensington Hotel in Tokyo, dozens are killed and injured while one man walks calmly away from the wreckage, a coy smile playing on his lips. Former Army intelligence officer Dan Reilly, now an international hotel executive with high level access to the CIA, makes it his mission to track him down. He begins a jet-setting search for answers as the clock ticks down to a climactic event that threatens NATO and the very security of member nations. Reilly begins mining old contacts and resources in an effort to delve deeper into the motive behind these attacks, and fast. Through his connections he learns that the Tokyo bomber is not acting alone. But the organization behind the perpetrator is not who they expect. Facilitated by the official government from a fearsome global superpower, the implications and reasons for these attacks are well beyond anything Reilly or his sources in the CIA and State Department could have imagined, and point not to random acts of terror, but calculated acts of war. RED Hotel is an incredibly timely globe-trotting thriller that’s fiction on the edge of reality.


Check out more about the book here. Read abut the authors here.

Present Day
The man held court in an abandoned warehouse.  He paced the cement floor while gauging the resolve of his associates, all personally chosen for the job, all veterans of other assignments.   He saw no fear, no hesitation.
One more review.  A final assurance that they had everything down.
Satisfied, he released them.  Alone, he removed the visuals he’d tacked to the wall; the maps, the photographs, and the timeline.  Holding the last enlargement, a photo of a downtown hotel, he let his mind wander to the exquisite details investigators would soon find and bag there.   They were the things that never made newspaper or TV-news accounts, the minutia cut from the page in editing for space and time: Watches stopped at the same minute.  Scattered strands of pearls. High-heeled shoes, none to be worn again.  Cell phones fused into plastic and metal blobs.  Melted glasses frames.  Teddy bears separated forever from their young owners’ grasps.  Grotesque, ashen shadows on the pavement that marked where the dead had fallen.
Then he pictured the brooms and shovels, the street cleaners and tractors that would eventually return the gruesome kill zone to respectability.  Life would go on.  But before that, to the man—the leader, the assassin— it would be his work of art.

WASHINGTON, DC
Capitol Hill
Kennedy Caucus Room
Fourteen hours behind Tokyo time
“No, Senator.” Dan Reilly had practiced his tone in front of his hotel bathroom mirror before testifying.  He wanted to strike a confident tone, neither friendly nor combative.  Strictly professional.  But this was the eighth time he had answered “no” to Montana Senator Moakley Davidson in less than five minutes.
So far, Reilly’s appearance before the Senate Appropriations Subcommittee on State, Foreign Operations, and Related Programs was going as well as could be expected.   The committee shared jurisdiction over appropriations with a subcommittee on the House side.  An appropriation was exactly what Dan Reilly sought.  He represented an American business with global interests—the Kensington Royal Hotel Corporation.
Clearly, the Montana senator was trying to push Reilly’s buttons, hoping to provoke an outburst.  But Davidson didn’t know Dan Reilly.  He would have been well served to do some research on the witness.
TOKYO, JAPAN
The assassin and two members of his team, all Japanese nationals, huddled in a garage near Harajuku Station on the outskirts of Tokyo.   One man would ride with him in a rented truck and serve as backup.  The other would drive a block ahead, relaying any traffic issues.  Their delivery was that important.
He checked his watch.  It was time.

WASHINGTON, DC
Reilly, Senior Vice President of International for Kensington Royal, understood the rules of engagement perfectly: when to listen, and equally important, what to say and how to say it.
“Senator Davidson, every day Americans travel the globe for pleasure, but so do our nation’s businessmen and women. They work hard to bring new revenue into the US, brokering commercial deals and spreading goodwill.  But when the hotels they stay in are attacked by terrorists, it must be seen as an attack against America.  That, sir, is why I’m here today.  To help protect American citizens and their interests abroad.”

The truck rolled through the city.  The crowds paid no attention to the white FedEx truck with its distinctive purple and red letters that formed an arrow between the “E” and “X.”  Indeed it was one of the world’s most iconic logos.   To the discerning eye, the arrow would appear slightly off, but from a distance it was good enough for tonight’s run to the Kensington Royal Hotel in the heart of Tokyo.
WASHINGTON, DC
“Terrorism is a tool of religious fundamentalists, lone wolves, individuals determined to make a statement, and nations intent on nation-building,” Dan Reilly said.  “Left wing, right wing.  Separatists, fanatics, fundamentalists, nationalists.  It’s a political tool.”  He lowered his voice.  “A deadly political tool.”
TOKYO

The FedEx truck slowed down, swung into the hotel valet parking area, and came to a full stop short of the entrance.  Brights on.  The driver faced the hotel.  He watched a security officer frantically bark orders.  None that would make a difference.  He actually wished he could stay to gaze into the guard’s eyes to see that special moment between life and death.  It always fascinated him.  One moment alive.  Existing.  The next, nothing and nothingness.  But what of the in-between?  The space between the two.  The instant.  The nanosecond.  Is there a recognition?  A feeling?  What could it possibly be?  As an assassin, it had long been an area of personal research.   But now he walked away and didn’t see that look as his truck bomb exploded.