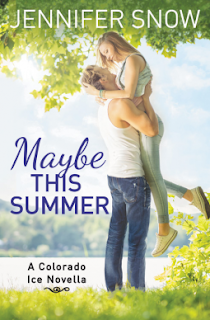 
Owen McConnell is used to being ignored. After all, it's only when he appears as the Colorado Avalanche's team mascot that he gets all the attention. When the costume is off, women tend to gravitate toward his famous hockey player friends. But after he meets lovely, damaged Paige Adams, he knows he can be the star player for her. She's raising funds for the hospital burn unit, and Owen's determined to help her out---and sweep her off her feet.


The burn unit has been near and dear to Paige's heart ever since the doctors helped her after a vicious attack. Yet the scars---both emotional and physical---haven't faded as much as she'd hoped. She's closed herself off from relationships, and the thought of opening up is terrifying. But Owen's sexy charm might be just the push Paige needs to start loving again. 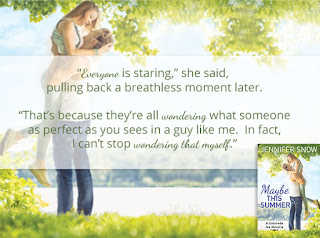 This story was a nice bridge between the second book and the forth coming third book in this series. For a short novel, this book read like a full length one. It had a good storyline with engaging characters and a happy ending. Because, who doesn't love a happy ending. I loved that Owen was the mascot for the Colorado Avalanche and not one of the players. Of times the mascot is overlooked. Mascots need love too. Paige may have scars but so did Owen. Together they showed that scars can be beautiful with love.

While, the romance between Paige and Owen was sweet with mostly kisses, I still felt the passion. They made a good couple. After finishing this book, I felt like I missed nothing. I look forward to reading the third book in this series. The men are hot and the women are sexy. 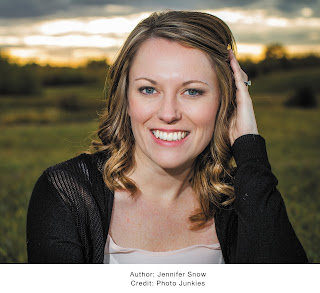 Jennifer Snow lives in Edmonton, Alberta with her husband and son. She writes sweet and sexy contemporary romance stories set everywhere from small towns to big cities. After stating in her high school yearbook bio that she wanted to be an author, she set off on the winding, twisting road to make her dream a reality. She is a member of RWA, the Writers' Guild of Alberta, the Canadian Authors Association, and the Film and Visual Arts Association in Edmonton. She has published over ten novels and novellas with many more on the way. 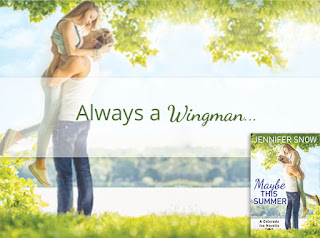 If anyone could help him seduce a woman, it was Bob Marley. Sliding the coins into the machine, he kept one eye on the door as she made her selection.

As the soft beat started, she smiled. “I love this song.”

He was in love with her smile. As she headed back toward the booth, he grabbed her hand and pulled her into him.

A slight look of intrigued panic flickered across her features. “What are you doing?” she asked as he drew her into him, wrapping his arms around her waist. Her soft perfume and the feel of her body beneath his hands made it impossible to let her go, even if he wanted to.

“Dancing with you. I knew if I asked, you’d say no,” he said, swaying slowly to the beat. Every other thought left him as he enjoyed the moment, knowing he may not get this opportunity again. Nothing else mattered except the woman in his arms.

She glanced around the bar, which had gotten busier while he’d been caught up completely in her. “No one else is dancing…”

“That’s okay. I don’t want to dance with anyone else.”

She sighed and reluctantly slid her arms around his neck. “This isn’t exactly a dance floor.”

“Any floor can be a dance floor,” he said, drawing her even closer as his hands slid a fraction lower. His thumbs gently massaged as his grip tightened at her hips.

She shot him a warning look as she readjusted his hands higher on her back.

But she didn’t remove them completely. “Sorry. I felt a vibe and went for it.”

She laughed. “Maybe not the right choice in songs,” she said, though finally swaying in sync with him.

His gaze fell to her hips in her tight-fitting jeans and he had to force a breath. “I think it’s the perfect choice in song. Now, it’s our song.”

“Yeah. Whenever we go to a wedding and they play it, we can say ‘hey, it’s our song,’ or when we’re driving through the mountains in the winter on the way to the cabin with the kids asleep in the back and it comes on the radio, we can crank it higher and sing along to…”

“Our song?” she finished shaking her head. “You really get ahead of yourself, don’t you?”

“You have no idea,” he said, his gaze locked on hers. The drinks, the beat of the music, the dim lighting in that corner of the bar, her soft, sweet smile made it impossible not to want to kiss her…but he held back. Too soon, too fast was not the way with this one, and that was the only speed he really knew. Not this time. This time it was her speed, her timing. He had no other choice—he was completely hooked on her.

But that didn’t stop him from taking her hand and kissing it, savoring the silky soft skin against his lips.

A conflicted look appeared on her face for just a brief second before she was leaning toward him. When her lips brushed his, his eyes widened. His grip tightened at her waist as her arms circled his neck once more.

Her height made her perfect to kiss. He didn’t need to bend at the knees or crank his neck. Her lips were soft, and she tasted like a mixture of gin and watermelon. Her hands crept into his hair, and she pressed her body to his. He could sense her give into the moment, all tension and apprehension disappearing. His hands cupped her face as he responded with an urgency he couldn’t control. Since the first day he’d met her, he’d wanted to kiss her, and now she was continuing to shock the hell out of him with the passion and heat that she’d initiated. Gone was the cool, guarded woman who’d walked into the bar two hours before. Now she was soft and dangerously seductive as her fingers tangled in his hair and her tongue parted his lips, demanding entry.

His fingers dug into her waist and only the beat of the music kept him grounded in their surroundings, preventing him from taking the kiss to an even more intoxicating level. He wanted so much more than a kiss…

Breathless, she pushed away slightly, her eyes snapping open as her hand flew to her lips.

He couldn’t not to take the opportunity to tease her. “That was a little forward, don’t you think?” He fought to calm his thundering pulse and hoped she couldn’t see the effect the kiss had had on him. His pants felt a whole hell of a lot tighter in the front, and resisting the urge to drag her out of there and back to his place was taking all his strength.

“Well, since you’d already planned family vacations, I took a chance that you wouldn’t mind,” she murmured against his lips as she moved in closer again. “And maybe the alcohol and the music went to my head a little.”

He touched her cheek as they continued to sway. Never in a million years had he expected this evening to turn out the way it was. She’d stayed beyond a quick drink. She’d actually taken the time to get to know him, and she’d let him in. The kiss had told him she was every bit as interested in him as he was in her. And he was feeling pretty damn good.

But a second later he knew he was screwed as her gaze wandered past him to the door. “Hey isn’t that your friend, Ben Westmore?" 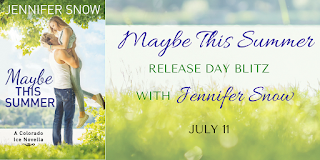