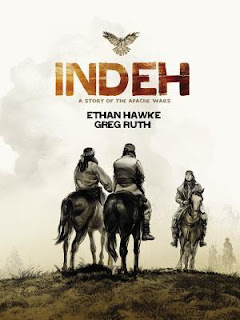 The year is 1872. The place, the Apache nations, a region torn apart by decades of war. Goyahkla, a young brave, has lost his family and everything he loves. After having a vision, he approaches the Apache leader Cochise to lead an attack against the Mexican village of Azripe. It is this wild display of courage that transforms the young brave Goyahkla into the Native American hero Geronimo. But the Apache Wars rage on. As they battle their enemies, lose loved ones, and desperately cling to their land and culture, they utter, "Indeh," or "the dead." When it appears that lasting peace has been reached, it seems like the war is over. Or is it?

INDEH captures the deeply rich narrative of two nations at war--as told through the eyes of Naiches, the son of the Apache leader Cochise, and Geronimo, as they try to find peace and forgiveness. INDEH not only paints a picture of some of the most magnificent characters in the history of our country, but it also reveals the spiritual and emotional cost of the Apache Wars.

Based on exhaustive research, INDEH offers a remarkable glimpse into the raw themes of cultural differences, the horrors of war, the search for peace, and, ultimately, retribution. The Apache left an indelible mark on our perceptions about the American West, and INDEH shows us why.

I like Mr. Hawke. In regards to being an actor, he has not always taken the most convenient road in the movies that he has starred in. He seems very passionate in everything that he does. Therefore, I am not surprised that this book turned into a labor of love. It showed in the storytelling as well as the graphics. Mr. Ruth did an amazing job to tell the story through his illustrations.

I am actually glad that Mr. Hawke was turned down by Hollywood to turn the story into a movie. I felt that this medium of a graphic novel was so much better than a movie could be. Which, this is a "graphic" novel in all aspects. There is nothing pretty about war. I did feel like a part of the "true" history was exposed with this book. Having not been very familiar with the Apache Wars, I am more intrigued to learn more about this history. Indeh is a tabletop book and conversation piece (in a good way).
Ethan Hawke Greg Ruth