Secrets of the Tulip Sisters 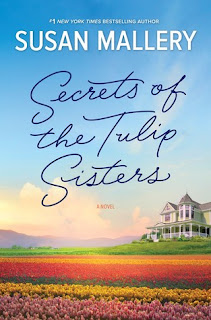 A wonderful story full of romance, forgiveness and the unavoidable ties that bind, SECRETS OF THE TULIP SISTERS is Susan Mallery at her very best.

The relationship of sisters Kelly and Olivia Van Gilder has been, well… complicated ever since their mother left them as teens, though it's the secrets they have been keeping from each other as adults that have unwittingly widened the chasm. But one thing they do share is the not-so-secret torch they carry for the Martin brothers.

In the small enclave of New Holland, Washington, Griffith and Ryan Martin were demigods. While Griffith was the object of Kelly's high school crush and witness to her mortal teenage humiliation, Ryan was for Olivia the boy who got away-something she's never forgiven Kelly for-and the only person since her mother who appreciated her wild streak.

Now, ten years later, both brothers are newly returned to town. Believing they're destined to be together, Olivia's determined to get Ryan back, until she discovers that she's not the only one keeping secrets…and that perhaps he's not the handsome prince she remembered. And even though Griffith has grown up to be more irresistible than ever, Kelly's impulse is to avoid him and the painful memory he represents, despite his resolve to right the wrong he caused her long ago-and her desire to let him.

I have seen this book advertised all over the internet. Every time that I saw this book I wanted to read it that much more. Well, I am happy to report that this book is every bit as good as I had hoped for. Secrets of the Tulip Sisters is a wondrous read that is filled with engaging characters that confirms you are reading a Susan Mallery book.

Sisters, Kelly and Olivia could not be that more different than oil and water. Yet, I loved them both. Kelly because of her practical side and Olivia for her fearless nature. However, as I got to know them both better, I realized that they weren't that different after all. They shared similar qualities but they just did not realize it until they brought the best out in each other.

After reading this book, I have gained a bigger appreciation for botanist. There is a great science in growing plants that I never even thought about. For example, in this book, Kelly would chill the bulbs first and then plant them to bloom. She knew how long it would take from start to finish and when she needed to plant them for her distributors.

Before I finish, I did want to add that the men in this book were great. There was Griffith, Sven, and Kelly and Olivia's father, Jeff. He even finds some romance of his own.