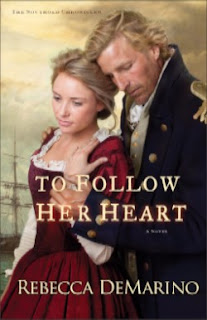 Duty and love are powerful forces. Only one has the power to make her life complete. It is 1664 and Patience Terry is devastated to learn that Captain Jeremy Horton's ship has been shipwrecked off the coast of Barbados. There were no survivors. She had hoped that Jeremy would someday give up the sea and settle down with her in Southold, Long Island.

Unaware his memorial service is being planned, Jeremy sails aboard a British warship with secret orders to attack New Amsterdam and claim it for the British Crown. When he makes his surprise return to Southold--and to an overjoyed Patience--it's not quite the happily-ever-after his beloved had hoped for.

With a finely tuned sense for authentic historical characters and settings, Rebecca DeMarino plunges you into a world of tall ships, daring journeys, and yearning hearts.

A 16th century story of Southold, Long Island. Patience Terry falls in love with the dashing Captain Jeremy Horton, who loves the sea and is captain of the Swallow. Jeremy sets sail but soon afterwards Patience and the townspeople hear Captain Horton has been shipwrecked in Barbados and all on board have been lost.

The townspeople in Southold attend church and have daily prayer for all concerned aboard the Swallow. After some time the people of Southold have a memorial service for Jeremy. However, Jeremy is not dead. He has been rescued and arrives in time for the memorial service. Jeremy decides to build another ship and set sail again. Patience on the other hand loves the land and has made a life for herself but has always remained true to Jeremy while he was lost at sea.

The question remains is just how much is Jeremy willing to give up for ay all for Patience? The author brings this book to a thrilling climax with the characters, beautiful setting, wonderful story, and everything else from the front to the back cover. I believe this is a must read for all readers. I look forward to reading more books by this author.
Rebecca DeMarino