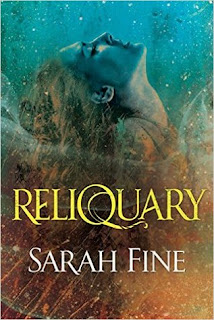 Mattie Carver’s engagement party should have marked the start of her own personal fairy tale. But when her fiancé, Ben, is violently abducted the next morning, her desperate quest to find him rips her away from small-town life and reveals a shattering truth: magic is real—and Ben is hooked. It’s not the stuff of storybooks. It’s wildly addictive, capable of producing everything from hellish anguish to sensual ecstasy almost beyond human endurance.

Determined to find out who took Ben and why, Mattie immerses herself in a shadowy underworld and comes face-to-face with the darkly alluring Asa Ward, a rogue magic dealer, infamous hustler…and her missing fiancé’s estranged brother. Asa has the power to sense magic, and he realizes Mattie is a reliquary, someone with the rare ability to carry magic within her own body, undetected. Asa agrees to help find Ben on one condition: Mattie must use her uncommon talent to assist his smuggling operations. Now, from magic-laced Vegas casinos to the netherworld clubs of Bangkok, Mattie is on a rescue mission. With Asa by her side, she’ll face not only the supernatural forces arrayed against her but the all-too-human temptation that she fears she can’t resist.

The concept for this book and the beautiful cover is what drew me to want to check this book out. This book did start out good. I especially liked the darkness of the story. It really did feel like Mattie and Asa were chasing after Ben in the underbelly of the magical world. Although, I have to say that I was neutral when it came to Mattie and Ben. I wanted a little more backstory about their relationship before Ben disappeared. For me it was Asa that I liked better in regards to the two brothers. Yet, part of this did have to do with the fact that Asa was a stronger presence in this book. The abilities that Mattie had with taking magic and controlling it was cool. However even with the darkness of the story, Asa, and Mattie I did find myself struggling to stay connected in the moment while reading the book. Despite this factor I would try this author again.

Author Bio:  Sarah Fine is a clinical psychologist and the author of the Servants of Fate and Guards of the Shadowlands series. She was born on the West Coast, raised in the Midwest, and is now firmly entrenched on the East Coast. Her latest novel, Reliquary, is available now.