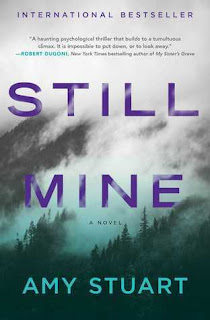 The Girl on the Train meets The Silent Wife in this taut psychological thriller.

WHAT HAPPENS IF YOU VANISH FROM YOUR LIFE AND LEAVE NO STORY BEHIND?

SOMEONE WILL MAKE ONE UP FOR YOU.

Clare is on the run.

From her past, from her ex, and from her own secrets. When she turns up alone in the remote mining town of Blackmore asking about Shayna Fowles, the local girl who disappeared, everyone wants to know who Clare really is and what she's hiding. As it turns out, she's hiding a lot, including what ties her to Shayna in the first place. But everyone in this place is hiding something from Jared, Shayna's golden-haired ex-husband, to Charlie, the charming small-town drug pusher, to Derek, Shayna's overly involved family doctor, to Louise and Wilfred, her distraught parents.

Did Shayna flee? Was she killed? Is it possible she's still alive?

As Clare uncovers the mysteries around Shayna's disappearance, she must confront her own demons, moving us deeper and deeper into the labyrinth of lies and making us question what it is she's really running from. Twisting and electrifying, this is a get-under-your-skin thriller that will make you question what it means to lose yourself and find yourself in the most unlikely places.

When I read this line promoting this book, I just had to check it out "The Girl on the Train meets The Silent Wife in this taut psychological thriller." I can't really say that this is like either one or how much on the scale of a psychological thriller it really is like as I could not find myself being intrigued by the story line or Clare. At first I thought it was because I started this book at night but I picked it up again the next day and continued to read it for several more chapters with no appeal. Sadly this book did not do anything for me.
Amy Stuart