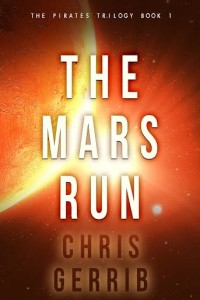 Title: THE MARS RUN
Author: Chris Gerrib
Publisher: Cincinnatus Press
Pages: 234
Genre: Science Fiction
When eighteen-year-old Janet Pilgrim’s boyfriend was killed in a training accident at the space academy, she thought she was going to be thrown out. Instead, she soon found herself shipping out as a junior astronaut on the forty-year old spacecraft Windy City bound for Mars.
But freighters and passenger ships aren’t the only craft plying the spaceways. When the Windy City is attacked by pirates on the way to Mars, Janet finds herself in more danger than she could ever have imagined.

I did like this book, I just wished that the action that happened in the last few chapters had carried through more through out the whole book. There was more dialect then there was action. Although, I found the author did a good job of describing the environment and the characters as I got images of all of them and the planet Mars and the spacecraft.