SEASON OF SALT AND HONEY 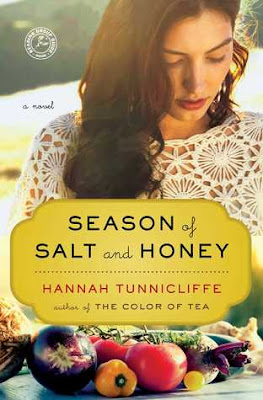 A NOVEL OF LOVE, GRIEF AND ANTIPASTI. Francesca 'Frankie' Caputo has it all figured out. She's finally going to marry the man she loves and then they will live happily ever after. But when a freak accident cuts her fiancé Alex's life tragically short, all of Frankie's future plans suddenly disintegrate. Drowning in grief, Frankie flees from her overbearing Italian-American family, and escapes to an abandoned cabin owned by Alex's parents in a remote part of Washington forest. As her heart slowly begins to heal, Frankie discovers a freedom that's both exhilarating and unsettling to everything she has always known for sure. So when her old life comes crashing back in, Frankie must decide: will she slip quietly back into her safe, former existence? Or will a stronger, wiser Frankie Caputo stand up and claim her new life?

I found this book to be sweet and charming. I was breezing through this book with quick speed. Frankie is a nice woman. Although even with all of the back and forth flashbacks to the past with her and Alex, I never really felt the love between them. In fact, I grew tried after a while of the flash backs with them together. The only good thing was that I good to see who Frankie was as a person and how she had matured in the present. Frankie's sister, Bella was cool. I liked Alex's brother, David. Who I grew closer to than Alex.

The recipes in this book were an added bonus. There were plenty inserted in this book. A nice thing because some books mention recipes but you only get like 2 or 3. Not that the book has to have tons or one for each chapter but a few more than just 3 is nice. Plus, I thought that the recipes featured in this book tied in nicely to the story.
Hannah Tunnicliffe