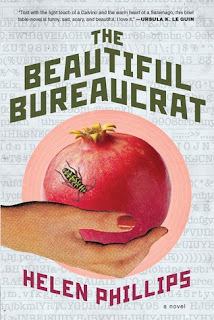 In a windowless building in a remote part of town, the newly employed Josephine inputs an endless string of numbers into something known only as "The Database." After a long period of joblessness, she's not inclined to question her fortune, but as the days inch by and the files stack up, Josephine feels increasingly anxious in her surroundings. The office's scarred pinkish walls take on a living quality. The drone of keyboards echoes eerily down the long halls. When one evening her husband Joseph disappears and then returns, offering no explanation as to his whereabouts, her creeping unease shifts decidedly to dread.

As other strange events build to a crescendo, the haunting truth about Josephine's work begins to take shape in her mind, even as something powerful is gathering its own form within her. She realizes that in order to save those she holds most dear, she must penetrate an institution whose tentacles seem to extend to every corner of the city and beyond. Both chilling and poignant, The Beautiful Bureaucrat is a novel of rare restraint and imagination. With it, Helen Phillips enters the company of Murakami, Bender, and Atwood as she twists the world we know and shows it back to us full of meaning and wonder-luminous and new.

When I first started reading this book I thought it was just alright. I mean there was something intriguing regarding the mystery surrounding Josephine's job. Yet, as the story progressed and I was introduced to some of Josephine's co-workers and her work place, my interest gained and I became more drawn into the story. As much as I could not stop reading this book as I got farther into it, it did take me a while to feel this way about the book.

It was kind of funny as a transformation came over Joseph, I found myself growing to despise him even though he did nice things for Josephine. However as the whole story was revealed at the end, I found myself liking Joseph again and even a little sad for him. There was no grand scheme of a big plot in this story. It was slow. I could not recall some of the details in the story but if you do stick with this book, the end shows it is worth it.
Helen Phillips