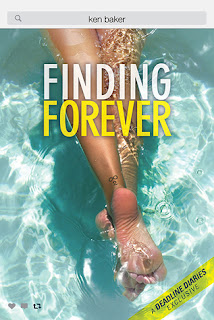 What if you could meet Hollywood celebrities and uncover their secrets? Maybe help save them from the clutches of some sort of shady character, earning their undying gratitude? E! News correspondent Ken Baker taps right into that wish fulfillment fantasy with Finding Forever, the first book in his new series, Deadline Diaries. The heroine is Brooklyn Brant, a teenage celebrity blogger. Her blog (Deadline Diaries) features the clickbait hook-ups, break-ups, and screw-ups of the Hollywood glitterati, but she has yet to nab the one juicy scoop that will establish her as the ultimate insider.

Enter America’s sweetheart, actress Taylor Prince. On the night of her poolside sixteenth birthday bash, she is abducted at gunpoint and finds herself blacking out in the arms of a dangerously handsome stranger.
Brooklyn is called by Taylor's assistant to locate the missing starlet under the radar and on a very tight deadline. And she will need a combination of instincts, sleuthing, and journalistic skills to solve the mystery and get the story of a lifetime.
In this suspenseful, dual narrative thriller, author Ken Baker uses his in-depth experience with celebrity journalism and behind-the-scenes truths to explore the ugly underbelly of Hollywood's obsession with youth and appearances. Reluctant readers, mystery fans, and celebrity followers alike will be horrified by Taylor’s plight and root for Brooklyn to save her in this fast-paced read that is pure aspirational fun.

I have read a couple of books by Mr. Baker. I liked them and thus the reason why I wanted to read his latest book. I would say it is just alright. There is nothing too special about it including the storyline or the characters. Although I did not hate the characters in the book. They just did not really bring anything to the story to amp the story to the next level. In fact, I was thinking and expecting that Brooklyn would be like a modern day Nancy Drew. Brooklyn did not really show me the gumption as a journalist or at least a investigative journalist. Yet, Taylor was nice. This is a plus and appreciated. She was not a stuck up celebrity. While this book was not one of my favorites from Mr. Baker, I still like him as an author.