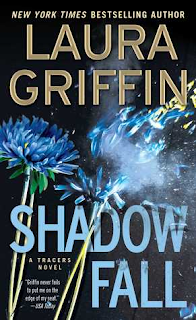 In the ninth romantic suspense novel in the New York Times bestselling Tracers series, author Laura Griffin brings back her elite cadre of forensic experts as they hunt down the most brutal serial killer yet.

Special Agent Tara Rushing arrives at a grisly murder scene and quickly discovers she’s got a serial killer on her hands. The killer is meticulous, making sure to wipe up even the smallest traces of evidence…but the Delphi Center experts are on the case.

The local sheriff has a suspect all picked out—ex-Marine and current security expert Liam Wolfe. Despite all her digging, Tara knows very little about Liam when she shows up at his sprawling Texas compound, which serves as headquarters for Wolfe Securities, and she’s surprised by her intense physical reaction to him.

As she and Liam grow closer, Tara finds herself depending on his skills and expertise to help her track a killer. But when another body turns up, Tara must decide if she can trust the man who’s quickly stealing her heart.

Another great book in this series. I was speed reading through this book. Because it was that good. I like Tara and her take charge attitude. She can back up her words. Tara is a big reason why I had such an enjoyable time reading this book. The other reason was Liam. He shows that he can be a great protector. Also, while Tara and Liam did not share a lot of screen time together as a couple, which is understandable as he is her number one suspect; still I could feel the connection between them. Just like this scene from the book: It is where Tara has just been shoot at and she confronts Liam. She acts so causal while telling Liam that she has just been shoot at. Liam somehow keeps his cool but barely. This scene showed me just how tough of a bad ass Tara really is and how much Liam has real feelings for Tara. He showed that he would go to the ends of the world to protect her.

My only fault with this book was that the crime itself while good focused on the crime somewhat but was not feeling like the main focus with not enough emphasis on the killer. The truth was slowly drawn out until the last third of the story when it flew by quickly. Yet, I will read the next book in this series.
Laura Griffin