THE GATES OF RUTHERFORD 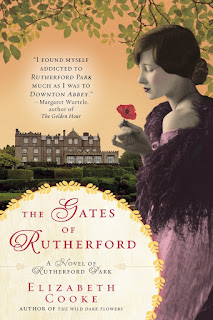 The rain fell softly on the day that she was to be married…Sometimes the longing for the old untouched days at Rutherford would return to her; the innocence of it all, the feeling that England would never change…
From Elizabeth Cooke, the author of Rutherford Park, The Wild Dark Flowers, and the international bestseller The Ice Child, comes THE GATES OF RUTHERFORD, (Berkley Trade Paperback Original; September 1, 2015) the third book in the highly addictive Rutherford Park series that returns to the stately environs of Rutherford Park and the embattled upper class Cavendish family during World War I.
Charlotte Cavendish has been dreaming of her old home at Rutherford Park. It is April 1917; she is nineteen years old. And everywhere there is change. The war still rages on the Continent, where her brother fights for the Royal Flying Corps. Her parents’ marriage is in jeopardy, with her mother falling for a charming American in London.

But not all is grim. Charlotte is marrying Preston, the blinded soldier whom she nursed back to health. Her parents couldn’t be happier about this. The young man hails from a well-established and wealthy family in Kent, and he’s solid and respectable. They hope he’s the one to tame their notoriously headstrong daughter.

But as time passes, Charlotte slowly comes to the realization that she is not truly happy. And for a reason she is only just beginning to understand. A reason she dare not reveal to the family—or the world.

This is the first book and first introduction I have had to the Cavendish family. Yet, this did not deter me from having a pleasant time reading this book. While I did find the family to be a bit dysfunctional I still felt their strong sense of family bond and pride.

Although I was going along just fine reading this book from start to finish, I felt that the first half was alright but the second half of the story was the better half and when the story picked up and moved along faster and smoother. I tended to gravitate towards Charlotte and her free spirit. I was so glad when she broke free and branched out on her own. The ending of this story was a good one and it left a smile on my face.

Why do you think Octavia advocates for "sensible marriages" for her daughters when it's not what she wants for herself?

I think that the reason that Octavia advocated for her daughters to have sensible marriages is because of her sense of duty and pride. Even though Octavia was separated from her husband, she still played the role in a way of committed wife.

Do you think Louisa and Charlotte would have had the courage to be with the ones they truly love if Octavia had not set the example?

To be honest, I am not sure if either woman would have really had the courage to venture out too much to find true love if they had not seen their mother find love and not be afraid to go after what she wants.
Elizabeth Cooke