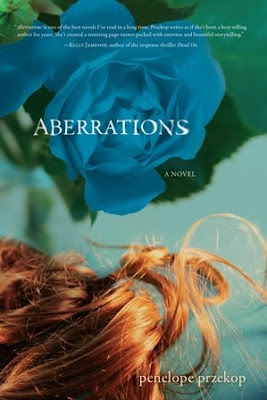 I was contacted by TJ Dietderich with Planned Television Arts to see if I would be interested in reading Aberrations. When I read the the book summary and found out this book is about a woman named Angel Duet who has narcolepsy, I thought that sounds intriguing. Thank you TJ for letting me read Aberrations.

Angel Duet and her father, Frank has had a good relationship all their lives. That is till Angel learns her father has been lying to her all those years about her mother Betty Lou. Plus it doesn’t help any that Angel is dealing with narcolepsy as well as her dad’s new girlfriend, Carla moving in. Angel doesn’t like Carla. The first thing Carla does when she moves in with her and her dad is to take down all the pictures of Betty Lou. While Angel tries to make sense of all the things happening around her, she won’t be alone. She will have her two friends from her cotton picking job. They are Tim, a gay guy who likes to party and Kimmy, a twenty-something virgin who lives in a trailer park. As well as one other person who cares for Angel a lot. His name is Mac; he is a doctor as well as married. Read Aberrations as Angel tries to reveal the truth about who her mother is but be warned as the saying goes “The truth shall set you free”.

Let me first off start by saying what a delightful treat Aberrations was. I do have to admit though that I do not know much on the subject matter of narcolepsy. I know that it is a sleeping disorder but I didn’t realize all the symptoms a person has to deal with. So on that note I found Angel to be a very strong and brave woman despite the circumstances she has to deal with when she learns her father has lied to her. Ms. Penelope Przekop’s Aberrations was a very well-written as well as thought out book. Penelope Przekop really did her homework on narcolepsy. I appreciate an author who does their research whether it is fiction or non fiction as I than find the story to become more real and to draw me in more. Aberrations was my first book by this author but I can honesty say I would check out other books by Penelope Przekop .

Also you can purchase the book at

can anyone help me
i have tried for over a week now to get a loan,i have very bad credit history mainly due to a failed marrage ,i have had all the usual ,wh loans,advantage loans ,yes loans ,get in touch and promise a [url=http://www.usainstantpayday.com]bad credit loans[/url] on paying the brokerage fee,i am reluctant due to reviews on the net and i have been stung before by a company called wentorth finance ,and never got the loan of the 50 pound fee back,
i have had an offer from flm but need a gaurantor which isnt really an option either .
i wondered if anyone had any loan companys that considered bad credit ,but loaned direct without these numerous sites with different alias but mainly did same thing pay us and we will get u loan (maybe)senario
has anyone also heard of a company called fresh loans they have they sent me details out but the may be a charge but not always ,i suspect she didnt want to tell me there was a charge

Anonymous said…
[b]All of these girls are online now! just click on your favourite to go to their cam![/b]

Anonymous said…
China and Russia put the blame on some screwed up experiments of US for the earthquake that happened in Haiti.
Chinese and Russian Military scientists, these reports say, are concurring with Canadian researcher, and former Asia-Pacific Bureau Chief of Forbes Magazine, Benjamin Fulford, who in a very disturbing video released from his Japanese offices to the American public, details how the United States attacked China by the firing of a 90 Million Volt Shockwave from the Americans High Frequency Active Auroral Research Program (HAARP) facilities in Alaska
If we can recollect a previous news when US blamed Russia for the earthquake in Georgio. What do you guys think? Is it really possible to create an earthquake by humans?
I came across this [url=http://universalages.com/hot-news/what-happened-in-haiti-is-it-related-to-haarp/]article about Haiti Earthquake[/url] in some blog it seems very interesting, but conspiracy theories have always been there.
February 2, 2010 at 1:39 AM