November 14, 2008
I want to thank Renee with http://www.hbgusa.com/ for sending me this book to review. 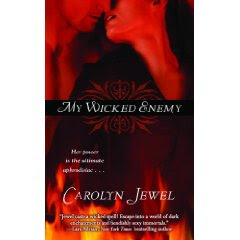 Carson Phillips is a witch. She has served a famous mage by the name of Alvaro Magellan for years. Carson has just learned of Alvaro’s true nature and his plans for her. Carson escapes, taking with her a very powerful stone talisman. Alvaro sends some of his men after Carson. He wants the talisman and he doesn’t care how it comes back to him, which means Carson may live or die.

Nikodemuis is a demon warlord. He has an assignment…to take down Alvaro and his army including Carson. From all the things Nikodemuis has learned about Alvaro and Carson, he believes this will be one of the easiest tasks he will complete. Carson ends up running right into Nikodemuis arms. You know what happens when a witch and a warlord experience feelings for each other…the end product is My Wicked Enemy.

My Wicked Enemy is a great novel by Ms. Jewel’s. I can’t believe I haven't read a book by Ms. Jewel’s before, as she has been writing for years. I have read many paranormal stories about witches and warlords and I have to say that My Wicked Enemy is right up there with the best of them. It was packed full of energy and contained one heck of a steamy romance. I think that Nikodemuis is the first demon warlord that I have really liked. For a witch I thought Carson seemed weak at the beginning but when it came time to step up to the plate, Carson proved she could keep up with the best of them. I am happy to have discovered a new author in Carolyn Jewel.

Unknown said…
Thanks for the wonderful review! I'm so glad you enjoyed My Wicked Enemy. I would like to correct one thing, (or maybe affirm your suspicion that I've had previous practice at this novel writing thing!) which is that it's not my debut novel. It is my first book for Grand Central Publishing, but I've written historicals for Leisure Books and a paranormal for the Lovespell's Crimson City series. Currently, I'm writing historicals for Berkley Books and paranormals for Grand Central.
November 14, 2008 at 8:24 AM

Cheryl said…
Oops. Sorry about that. I will correct that mis information.