The Lady Flees Her Lord

November 12, 2008
I want to thank Danielle with http://www.sourcebooks.com/ for sending me this book to review. 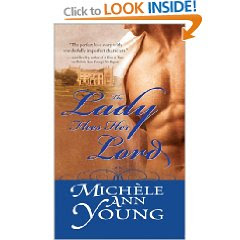 Lady Lucinda Denbigh is stuck in an awful marriage that contains a husband who both physically and emotionally abuses her. Lucinda can’t tolerate it anymore. She runs away. Along the way she meets Lord Hugo Wanstead, a dashing man on the outside but a bear on the inside. With the death of his wife haunting Wanstead; he has become bitter. Plus it’s been way too long since he felt the touch of a woman. When Wanstead invited Lucinda into his home, he wasn’t prepared for the attraction he would feel towards Lucinda. The first time Lucinda met Hugo he was seemed unapproachable but after spending time with Hugo and living at his home, Lucinda has come to realize that under Hugo’s tough persona that he just might have a heart of gold. The only thing left between these two is…who is going to make the first move.

Historical romances will hold a dear place in my heart. I used to read them all the time, then slowly moving away from them but recently found myself going back to them. There is just something about time period books that I love. Every time I read a historical romance novel, I am instantly transported back in time to a place where the people are friendly and chivalry was at its highest. Regrettably though I have had a hard time finding a good historical romance book till now. The Lady Flees Her Lord is not only good but a winner! Michelle Ann Young should be proud of this book as it is everything a fan like I needed to really get excited about these types of stories again. I gladly look forward to reading Michelle’s next release.

The Bookworm said…
This sounds good, I like the cover!
great review. I love historical romance too.
http://thebookworm07.blogspot.com/
November 15, 2008 at 9:07 AM