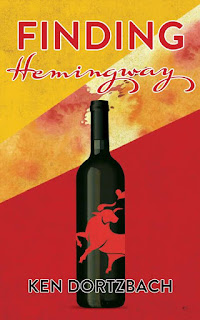 A romantic comedy with a touch of magical realism, Ken Dortzbach’s debut novel Finding Hemingway (Cloister Inn Publishing, July 7, 2020) sends its protagonist on a life-changing adventure after she receives a mysterious phone call from Ernest Hemingway.
Hyper-focused, overachieving New York lawyer Callie McGraw has six months between jobs and a hefty severance check when she is called to Spain by Ernest Hemingway. She begins packing her bags for the sun-kissed streets that night. Starting in Barcelona, Callie embarks on a six-month escapade of a lifetime, a whirlwind of Spanish food, wine, art and dancing, with a revolving cast of friends and lovers keeping her company in each new locale. Callie’s next cocktail is never far away, but Hemingway knows her secrets, the demons that plague her deep down. With each mysterious call and each enigmatic clue, Hemingway challenges her to open herself to laughter, passion and love. Ultimately, he defies Callie to face her greatest fears and embrace life on her own terms.
A vividly drawn ode to both Spanish culture and the soul-striking spark of a good book, Finding Hemingway showcases the empowering story of one woman’s journey to self-acceptance and fulfillment.  My Review I liked this book. It has a certain charm about it. Although, I did feel like it was a bit light in substance. Another reader commented that they felt Callie was whiny and immature. I will agree that at times she did come off like this but it was not enough to completely turn me off from her.
In regards to the other characters in this book. They were all fine but there was no one that I particularly was a fan of. They all just kind of felt like people who you might party with but would not really become best friends with.
When it came to Hemingway and this book; maybe it was too above my head but I really did not see too much of a connection to him and the story. It felt like he was there for reference but not really in context or to add anything to the story. This still could be the same book even without Hemingway. Yet, I did like all of the culture adventures that Callie experienced along her journey.


KEN DORTZBACH: Ken Dortzbach is a native of Madison, Wisconsin. A graduate of Princeton University and the Northwestern University School of Law, he practiced law internationally for almost twenty years, including living abroad and working in countries across the globe. During that time, he found a special appreciation for Spain’s history and culture; when it came time to pen his first novel, the country became the perfect backdrop for his book. In combining his passion for Spain with his longstanding interest in Ernest Hemingway, Finding Hemingway was born. He has two kittens—along with two grown children. Ken and his wife now live in Wisconsin and divide their time between Milwaukee and Madison; they enjoy traveling far and wide together. To learn more about Ken’s work, please visit: https://kendortzbach.com

An Interview with Ken Dortzbach
Spanish culture is one of the many cultures I love. The Spanish have a certain skill at living in the moment. So often we do things we need to do — save for retirement, eat right, exercise. Sometimes you just want to do something because you want to do it and you are passionate about it. Sometimes you want to be a little Spanish.
As I mapped out the story I wanted to tell I realized it worked better with a woman as the main character. It just felt right. But it is not just a book for women. It is a book for anyone who likes to read. My wife teased me that I wrote a “chick book,” but I told her I wrote a book about personal growth and development where the main character happens to be a woman. Callie McGraw is awesome.
I have had a longstanding interest in Ernest Hemingway. I also have an appreciation for many cultures, one of which is Spanish culture. It made the perfect backdrop for the book and the plot.  I was also oddly inspired by the post-impressionist landscape paintings of French painter Paul Cézanne. When you look at his pre-Cubist landscape paintings you see a bunch of block forms and you say, “Hey, those are just a bunch of block forms.” But when you look harder you see how he defines shape and you see more details. I tried to take a similar approach with some parts of my book. For example, most of the characters don’t have last names. Sometimes certain details can distract from the story or what you are trying to develop.
This book would be enjoyed by anyone who likes to read and is intrigued by Spain. The main character, Callie McGraw, has a special relationship with the book The Sun Also Rises. That provides the basis for part of the story, and it goes from there as you learn more about her and her life. The book is basically a quirky romantic comedy centered around female empowerment.  It is a book for people who love books and love to read. It is a book for people who have wrestled with challenges and overcome them. It is a book for people who have fallen in love or want to fall in love.