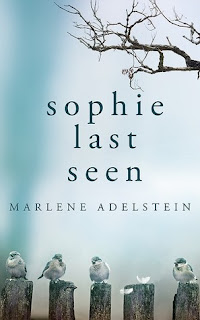 Six years ago, ten-year-old Sophie Albright disappeared from a shopping mall. Her mother, Jesse, is left in a self-destructive limbo, haunted by memories of her intense and difficult child, who was obsessed with birds. Trapped in her grief and guilt, Jesse stumbles through her workdays at a bookstore and spends her off hours poring over Sophie’s bird journals or haunting the mall to search for the face of her missing child.

When Star Silverman, Sophie’s best friend, starts working at the bookstore, Jesse is uncomfortable around the sarcastic teen, who is a constant reminder of her daughter. But Star has secrets of her own, and her childhood memories could be the key to solving Sophie’s disappearance.

With help from Star and Kentucky “Tuck” Barnes, a private detective on the trail of another missing girl, Jesse may finally get some closure, one way or the other.


This book moves slowly but it is not a bad thing. Usually, moving slowly through a story can be a bad thing as it means that the pacing has slowed down but this is not the case with this story. Yes, the events that take place within the story are subtle but that is because the story is meant to really slow down and focus on the characters "raw" emotions. Jesse and Star are the main leads. Although, Tuck is instrumental in helping Jesse to find peace. Truly, it was Jesse and Star that healed one another. They were both grieving and hurting inside. By the end of the story, a weight had been lifted off their shoulders and they could start to move forward.

Because of how wounded everyone is in the story; the tone of the story could have been very depressing but it wasn't. The author did a very good job of keeping this from happening. Instead, I felt for Jesse and Star. While, Sophie was already missing at the beginning, through both women, I felt as if I got a good glimpse into who Sophie was. She was loved and a joyous girl. If you enjoy reading books in the vein of Nicholas Sparks and Jodi Picoult than, you need to pick up a copy of this book, Sophie Last Seen by Marlene Adelstein.

Phoenix said…
This was an intriguing read. Although on the surface our characters seemed to be locked a continious cycle of tragedy and dispair. The story still gave me a immense sense of hope. Through our darkest moments, through chaos and the fear we can always see the light in the distance is still shining, getting brighter each time we step closer towards it. Each step getting easier as we the flame within us to grow stronger.
January 1, 2019 at 12:03 AM