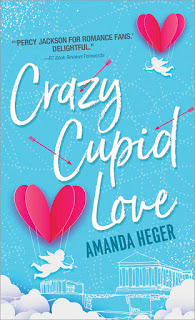 Have you fallen deeply in love,
But get nervous approaching your dove?

Don't be stupid;
Hire a cupid!

'Cause sometimes love needs a shove.
Eliza Herman (a.k.a. The World's Worst Cupid) has spent her entire life carefully avoiding her calling as a Descendant of Eros. After all, happily-ever-afters are nothing but a myth. But when a family crisis requires her to fill in at the local Cupid-for-hire shop, Eliza finds herself enchanting couples under the watchful eye of her assigned mentor, Jake Sanders...the one man she could never get out of her head.
Before long, Eliza is rethinking her stance on romance—until things start going terribly wrong with her enchantments. Now Eliza and Jake must fight to unravel a conspiracy that could destroy thousands of relationships, including their own...and spell the end of Love itself.
No pressure, right?
My Review
I picked up a copy of this book due to the premise. It sounded good and I was ready for a light hearted, funny read. Well the light hearted part was correct but the humor was missing.
Eliza is a klutz. I kind of felt bad for her. She had a lot to prove with her family history. Eliza tried her hardest to show she could be a good cupid even if at first she was resistant to the idea. Although, I could understand where she was coming from. Her mother was mean towards Eliza and had no faith in her.
In regards, to the love interest Jake; I thought he was alright. He at least tried to bring some humor to the story. Again, my major disappointment is the fact that I wanted humor and didn't get it. Additionally, the characters were "so, so". The storyline felt like it was lacking in substance. A nice idea that didn't fully execute all the way.
You can request a copy of this book to try for yourself on Netgalley until January 22.
Amanda Heger