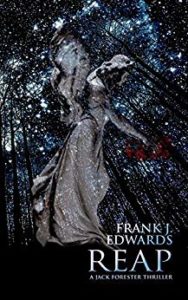 Dr. Jack Forester, the lead character of author Frank J. Edwards’ previous best-selling medical thriller, Final Mercy, faces the challenge of his life when a religious terrorist bombs the medical center to stop a new experimental procedure that promises to rewrite the rules for the reproductive care of women worldwide. As usual, Jack soon finds himself at the heart of a mystery, which grows more interesting and terrifying when his journalist wife Zellie decides to dust off her sleuthing skills.

Dr. Nirav Desai is a bioengineer. He works on the prosthetic fallopian tube project called Gilchrist Tube. The concept of the project is that the prosthetic separates the X and Y cells based on differential molecular weight to help determine the gender of the unborn child before it is conceived. The project is controversial to say the least. Yet, there are some who don't want the project to gain ground.

I have not read the first book but this book can be read as a stand alone novel. Yet, after reading this book, I do want to go back and pick up a copy of book one. Jack may be the main focal character in this series but for me it was his wife, Zellie that dominated the storyline. She seemed to do more of the investigating and was the major player to crack the case. Jack did make a larger appearance in the latter half of the story. The little bit that I became familiar with Zellie; the more I wanted to get to know her better.

After the opening scene, the story seemed to have lost a little steam and slow down some. Luckily, not too much as I still blazed through this book pretty fast. All of the characters were interesting and played major parts in the story. For anyone looking for a nice medical thriller, you should check out this book.