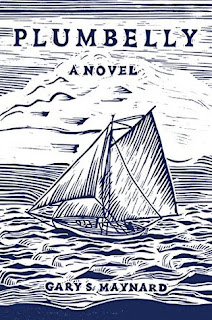 Title: Plumbelly
Author: Gary Maynard
Paperback: 218 pages
Publisher: Flat Hammock Press
Release Date: June 26, 2018
Language: English
ISBN-13: 978-0-9818960-3-8
Price: $24.95
In Plumbelly (Flat Hammock Press, June 2018)—the debut novel by sailor and Martha’s Vineyard, Massachusetts resident Gary Maynard, fifteen-year-old Gabe lives on a home-built sailboat with his family, on the mountainous South Pacific island of Ma’atea where the dream of an idyllic world voyage has turned dark.
Gabe is a white outcast in the rough and tumble Polynesian society, itself in the midst of upheaval, modernization and change.  His father is mercurial and cruel; his mother, passive and remote. Gabe’s only solace as he struggles to find his way amid the turmoil lies in his remarkable gifts as a sailor, his love of wooden boats and the sea, and his friendship with Lloyd—a kindred spirit who longs to escape from his own world of abuse and violence.
When they salvage Plumbelly, an abandoned wooden sloop, their dreams of freedom begin to take shape. After events at home and at school spin into violence and Gabe is suspected of murder, the two boys, along with strong-willed and rebellious Tanya, flee aboard Plumbelly into the tropical night and the vast Pacific. Grappling with life at sea, their sexuality and their pursuers, Gabe and his friends are forced to face themselves and find the strength to survive.
My Review
Mr. Maynard really does a wonderful job of this coming of age story. The main protagonist, Gabe is a likable and relatable character. He was an outcast in school. This is because he was lighter skin tone as well as the fact that the teacher was kinder towards him. Yet, Gabe never asked to be teacher's pet or acted differently because of his skin tone.
Gabe gets swept away on an sailing excursion aboard the Plumbelly. Yet, he is not alone. He is accompanied by Tanya. There love story is not about just sex but about finding one another and discovering love. Yet, the journey that Gabe took to adulthood was not smooth sailing. There was sexual abuse by an adult as well.
In a way, this book read kind of like a poem. It had that vibe and tone to it. Also, I could not help but get an imagine of Blue Lagoon reading this book. Mr. Maynard's knowledge of sailing did help with this story. It was realistic and I felt like I was a passenger on the Plumbelly. Plumbelly is Mr. Maynard's debut novel. This book is filled with a rich storyline and just as rich characters that come alive within the pages of this book!
Check out my Instagram post.


About the Author
Gary Maynard is a Principal at Holmes Hole Builders, general contractors building high-end architect-designed residences on Martha’s Vineyard. His construction projects have been widely published in periodicals such as Architectural Digest, Dwell, Fine Homebuilding, Boston Home, Vineyard Style and Martha’s Vineyard Magazine. In addition, Gary is an expert traditional boat sailor and an avid triathlete. He resides in West Tisbury, enjoying an “empty nest” with his wife Kristina, now that their two children have flown the coop. Plumbelly, set on a sailboat in the South Pacific, is Gary’s debut novel.
Gary S. Maynard