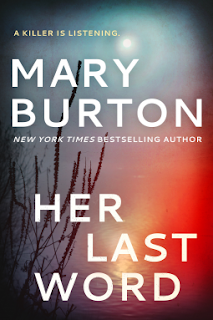 Fourteen years ago, Kaitlin Roe was the lone witness to the abduction of her cousin Gina. She still remembers that lonely Virginia road. She can still see the masked stranger and hear Gina’s screams. And she still suffers the guilt of running away in fear and resents being interrogated as a suspect in the immediate aftermath. Now Kaitlin has only one way to assuage the pain and nightmares—by interviewing everyone associated with the unsolved crime for a podcast that could finally bring closure to a case gone cold.

But when a woman Kaitlin questions is later found stabbed to death, she fears that she’s drawn a killer out of hiding. It’s Detective John Adler’s fear that the murders have only just begun. Now his job is to keep Kaitlin safe.

As a bond between Kaitlin and Adler builds, the past closes in just as fast—and it’s darker than Kaitlin remembers. Soon, her wish will come true. She’s going to find out exactly what happened to Gina. Someone has been dying to tell her.

I am a fan of this author's. The last several books have really been winners. While, I did like this book, I was not in love with it as I was the past several books. For me, I found my connection with Kaitlin and John but the story as a whole moved at a slow pace. There was not a lot happening. Yes, there was a killing but the details and the intensity of the investigation was not very hyped up. The killer stayed back and didn't appear too much in the lime light. In fact, I found the "interview tapes" more exciting then the story. I wanted more of a cat and mouse game.

Yet, I will say that this is more character driven. I was cheering for Kaitlin that she was like a one woman crusader fighting for justice for her cousin, Gina. She would not give up no matter what the cost. Detective Adler is smart. Plus, I like that he did not discount Kaitlin and her theories. They did strike up a romance but it was subtle and not distracting from the story. Overall, this was an enjoyable read.
Mary Burton