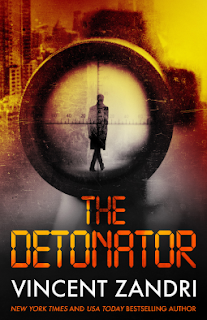 Ike Singer is a demolitions expert, or "master blaster". He is second to none at his craft, knows every type of explosive known to man, and is the one everyone turns to when they need a safe, controlled explosion. Despite being at the very top of his profession, a personal mistake that led to catastrophe nearly brought Ike's life to ruin. He has spent every day since atoning for that sin and trying to piece his family back together. And after a great deal of work and soul-searching, Ikebelieves he has finally moved on. Until now. Just when he believes he has found peace, Ike is targeted by a brilliant psychopath bent on systematically destroying his life. But Ike isn’t some random target: this grudge runs deeper than a landmine’s crater. Ike must use every resource in his arsenal to prevent this killer's vengeance, and be willing to sacrifice everything to save his family and his life before the timer hits zero. Because just when you think the past is behind you, yourealize the fuse has been lit this whole time... Vincent Zandri is one of the most acclaimed thriller writers working today, and in The Detonator he offers his most suspenseful, shocking, and explosive novel yet.

In regards, to a shorter novel from this author, I did like this book. It was a quick read. Yet, it had a good storyline, engaging characters, and moved at a fast pace.

You might want to hate Ike. Even say that he brought the trouble to his doorstep but as I got to know him and see how much he really cared and loved his family; I could not hate or blame him. In fact, you could say he was one of those men that were changed once he had a child. Henry is a bright spot in this book. Allison is definitely a scorned woman. She brings a whole new level to "crazy".

The most action is in the last third of the story. It is where Ike's skills as a bomb expert is tested by Allison's bomb expertise. There are some intense moments. Which, the story is wrapped up nicely by the end. I did enjoy this book.