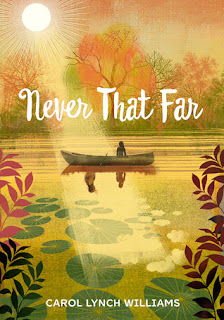 Libby Lochewood is twelve years old in 1967 when her grandpa dies of a heart attack. She is devastated at losing her best friend. Now that Grandpa's passed on, it's just her and her father, and he is so overcome by grief that he can barely get out of bed in the morning.

The night of the funeral, though, Grandpa's spirit appears in Libby's bedroom and tells her three important things: first, that she isn't alone or forgotten--"The dead ain't never that far from the living," he says; second, that she has "the Sight"--the ability to see family members who have died; and three, that there is something special just for her in the lake. Something that could help her and her father--if she can find it. He kisses Libby on the cheek and vanishes in a soft glow of light and color.

Libby begins her search along with her friends Bobby and Martha, but it's hard to know if they've found what Grandpa wanted her to find since they don't really know what it is. As Libby's father falls deeper and deeper into depression, Libby and Grandpa work together on a plan to help her father believe that their loved ones who have died are much closer than he thinks. But it will take all of Libby's courage and her gift of Sight to convince her father and help him believe that the dead are never truly gone.

Never That Far is set in the lush, rural landscape of southern Florida and is a middle-grade novel about friendship, hope, and the power of family love.


I found this book to be a really good read. It is written well for the younger readers. Although, the subject matter that this book deals with is better read for the mature young audience or at least read as a family book. This way parents can help explain death. Personally, I don't really believe in an afterlife other than heaven. So, depending on your religion and beliefs, you will have to explain about the afterlife. Some do believe in "sight".

I liked Libby a lot. She was so open and willing to accept the gift of "sight". She didn't question the fact that she could see and communicate with her dead grandpa. They had good conversations. I felt like I really got to know Libby and her family. What I did like the most is that this book featured Libby as the one to help heal her father and so him it is ok to be sad but also to rejoice in his memories of his father. Never That Far is a charming, sweet read.

Unknown said…
Anthony Hopkins can be proud of having created one of the first original horror characters of the postwar era. His Dr. the devil's candy
Hannibal "The Cannibal" Lecter has rightfully earned a place in the pantheon of legendary monsters. Happy death day Hopkins was only the second actor to have won an Academy Award for playing a villain, the first being Fredric March for his remarkable performance in the rarely-seen "Dr. Jekyll and Mr. Hyde" (1931). The American Film Institute lists Hopkins' Lecter as the #1 screen villain in movie history. Happy death day 2017
April 3, 2018 at 8:44 PM