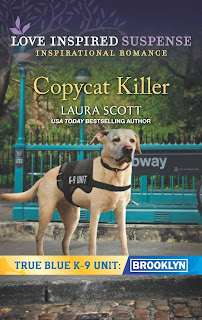 Book description: Murder strikes close to home for a new K-9 unit in Brooklyn. When a double homicide is strikingly familiar to a twenty-year-old cold case, Detective Nate Slater is rattled by the parallels. With a child as the only witness, he and his K-9 partner must protect little Lucy and her aunt, Willow Emery. Nate’s rough past means he always keeps an emotional distance…but in this case getting closer is the only way they’ll all survive. 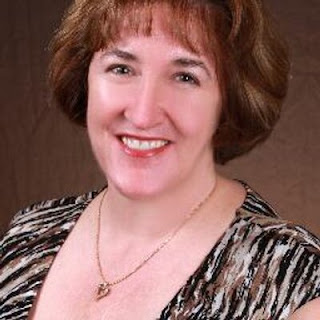 About Laura Scott: Laura Scott is honored to write for the Love Inspired Suspense line, where a reader can find a heartwarming journey of faith amid the thrilling danger. She lives with her husband of twenty-five years and has two children, a daughter and a son, who are both in college. She works as a critical-care nurse during the day at a large level-one trauma center in Milwaukee, Wisconsin, and spends her spare time writing romance. Visit Laura at www.laurascottbooks.com.

Excerpt, COPYCAT KILLER by Laura Scott
Nate suddenly heard a panicked shout. “Help! Police! Help!”
What in the world? He turned to look over his shoulder. A young man in a baseball cap and a Yankees jersey was waving his arms in a frantic attempt to get his attention.
“Help! Someone is being attacked!”
He hesitated, unwilling to leave Willow and Lucy there alone. Willow was still chatting with Angela, the two women cooing over Lucy, so he made a split-second decision to respond. “Willow? Stay here. I’ll be right back. Come, Murphy.”
“This way!” The Yankees fan turned and disappeared around the corner, clearly expecting Nate and Murphy to follow.
Nate broke into a jog, dodging pedestrians while keeping Murphy close to his side. He listened intently but didn’t hear any sounds indicating an attack. He hoped he wasn’t going to be too late. As they turned the corner, he raked his gaze over the area, searching for anything suspicious.
There was no obvious sign of an attack, but the Yankees fan was still several paces ahead. “Hurry! Over here! In the alley!”
Nate darted around a group of tourists. He came to the spot where the Yankees fan had been, in front of a long narrow alley, but the guy was gone. He’d vanished like some sort of magician’s trick.
There was no attack.
His gut clenched with fear. Willow! Lucy!
He whirled around and instantly ran back to the café. The sidewalk seemed to stretch forever. He’d followed the stupid Yankees fan farther than he’d realized.
And it had been nothing but a clever ploy to get him and Murphy out of the way.
No! How could he have been so gullible? He quickened his pace, unable to bear the thought of something happening to Willow and Lucy.
He wheeled around the corner, his heart lodged in his throat. Even more people crowded the sidewalks now.
Lucy was crying, loud screeching sobs. “Aunt Willow! Aunt Willow! Come back!”
A pedestrian got in his way and he nearly plowed the guy over in his haste to reach Willow and Lucy.
“No! Stop!” Willow’s voice was muffled. He caught a glimpse of someone dressed in black with a hat pulled low over his forehead dragging her toward a black sedan double-parked a few spots up from the café.
“Stop! Police!” He shouted as loud as he could to be heard above the din. Realizing he might be too late, he reached down and released Murphy’s leash. “Get him, Murphy. Get him!”
Murphy took off running. Like a racehorse, he closed the gap between him and Willow faster than Nate ever could. 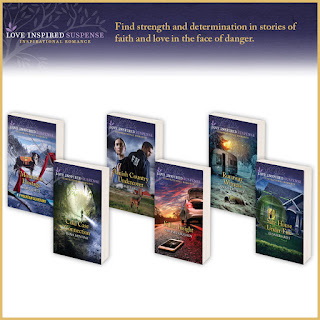 The man with the hat must have realized the same thing, because he abruptly pushed Willow toward Murphy, then spun and took off running in the opposite direction.
It all happened like a scene unfolding in slow motion. Willow tripped over Murphy. His partner yelped as the two of them tangled together. Then Willow hit the pavement with a thud. Lucy was still crying, her stroller several feet away from Willow and Murphy.
“Willow! Are you okay?” He finally caught up to them, crouching down to check Willow and his partner. Murphy had managed to free himself from Willow. He was up on his feet, staring in the direction the intruder had gone.
“Get him,” Nate repeated. He didn’t like sending his partner off alone, but he couldn’t leave Willow and Lucy.
The yellow Lab took off, trotting fast, his nose periodically going to the ground.
Murphy could track just about anything, but he wasn’t trained to go into subway stations without Nate. A fact he hoped the assailant didn’t know, as there was a subway entrance at the opposite end of the block.
“What happened?” He helped Willow to her feet.
“He—came out of nowhere.” Her voice was shaky, her hands trembling. Her palms were scraped and bleeding, but she didn’t seem to care. “I didn’t notice until he grabbed me.”
“Shh, it’s okay.” He caught her in his arms for a quick hug, then turned toward Lucy. Some instinct had him lifting the girl from her stroller and handing her over to Wil-low. They clung to each other, much the way they had outside the scene of the Emery murders.
His gaze fell on the license plate of the black sedan abandoned by the would-be kidnapper. He quickly memorized the plate number, hoping it would be a clue as to who’d attacked Willow.
A sharp dog bark caught his attention. His heart was hammering, and he desperately wanted to go after Murphy. What if the assailant tried to hurt him? Nate took one step forward, then another, but stopped.
He couldn’t leave Willow. He had to trust in his partner’s training. The K-9 would soon return.
Murphy came running through the crowd of onlookers, returning to Nate’s side.
“Murph!” He went down to his knee and wrapped his arms around his partner. From what he could tell, Mur-phy wasn’t hurt.
Unfortunately, the assailant had gotten away.