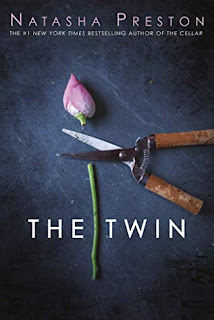 In this twisty psychological thriller from the #1 New York Times bestselling author of THE CELLAR, Ivy finds out that her twin sister, Iris, is trying to push her out of her own life--and might be responsible for their mother's death.After their parents divorced, 10-year-old twins Ivy and Iris were split up--Ivy lived with Dad, Iris with Mom. Now, after a tragic accident takes their mom's life, the twins are reunited and Iris moves in with Ivy and their dad. Devastated over Mom's death, Iris spends the first few weeks in almost total silence--the only person she will speak to is Ivy. Iris feels her life is over and she doesn't know what to do. Ivy promises her twin that she can share her life now. After all, they're sisters. Twins.It's a promise that Iris takes seriously. And before long, Ivy's friends, her life at school, and her boyfriend, Tyler, fall under Iris's spell. Slowly, Ivy realizes she's being pushed out of her own life. But she's just being paranoid, right? And Mom's accident was . . . just an accident. Right? It's not like she--or Dad--or Tyler--are in any danger. . . .

Who is not a fan of a psychological thriller. I know I am. To be honest, I thought this was a good book but it did feel like it did read for a younger audience. The intensity levels were mild and this included the pranks and such that Iris played on Ivy. There were a couple of times that I barely blinked at what Iris did to Ivy or did not even realize she had done something until I read the next section when Ivy was getting blamed. Iris was very evil. The things she did to her sister were mean. You could say that I despised her.

While, I did feel like this book was lighter on the psychological thriller aspect, it was still a good read. It kept my attention for the most part. The latter third of the story is where things really picked up aka "meat" of the story. The ending made up for the lack of full excitement I felt about this book.
Natasha Preston