All Your Twisted Secrets 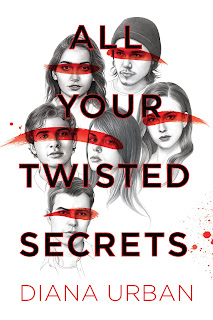 This thrilling debut, reminiscent of new fan favorites like One of Us Is Lying and the beloved classics by Agatha Christie, will leave readers guessing until the explosive ending."Welcome to dinner, and again, congratulations on being selected. Now you must do the selecting."What do the queen bee, star athlete, valedictorian, stoner, loner, and music geek all have in common? They were all invited to a scholarship dinner, only to discover it's a trap. Someone has locked them into a room with a bomb, a syringe filled with poison, and a note saying they have an hour to pick someone to kill ... or else everyone dies.Amber Prescott is determined to get her classmates and herself out of the room alive, but that might be easier said than done. No one knows how they're all connected or who would want them dead. As they retrace the events over the past year that might have triggered their captor's ultimatum, it becomes clear that everyone is hiding something. And with the clock ticking down, confusion turns into fear, and fear morphs into panic as they race to answer the biggest question: Who will they choose to die?

I was drawn into this story right from the beginning. All of the cast of characters were actually engaging. Although, it was pretty obvious that the main voices were Amber and Sasha. The nice girl versus the mean girl.

So how far will people go to keep their secrets hidden? This is what Amber and her friends will find out when they are trapped in a room. They have to make a choice...kill one of their own or they all die. This book alternates between the present and past. The scenes in the beginning with the present are short snippets because the past is the "meat" of the story.

Readers are treated to each character so as to get to know them well. Therefore, when the story circles back to the present; you are left really relating to the characters and the struggle they find themselves in as to the choice they have to make. It is not as easy as it might first appear. I read this book in a matter of a few days. Ms. Urban did have me on the edge of my seat with anticipation as to how this story would end.
Diana Urban

clarabenet90@gmail.com said…
Eye candy ! For a catchy book like this, good reviews and marketing can give the sales a solid boost. Try usabookreviewers.com for reviews. I can also help create a free marketing strategy specific to your genre and book.
March 18, 2020 at 4:55 AM