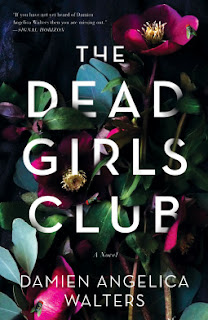 A supernatural thriller in the vein of A Head Full of Ghosts about two young girls, a scary story that becomes far too real, and the tragic--and terrifying--consequences that follow one of them into adulthood.Red Lady, Red Lady, show us your face... In 1991, Heather Cole and her friends were members of the Dead Girls Club. Obsessed with the macabre, the girls exchanged stories about serial killers and imaginary monsters, like the Red Lady, the spirit of a vengeful witch killed centuries before. Heather knew the stories were just that, until her best friend Becca began insisting the Red Lady was real--and she could prove it. That belief got Becca killed. It's been nearly thirty years, but Heather has never told anyone what really happened that night--that Becca was right and the Red Lady was real. She's done her best to put that fateful summer, Becca, and the Red Lady, behind her. Until a familiar necklace arrives in the mail, a necklace Heather hasn't seen since the night Becca died. The night Heather killed her. Now, someone else knows what she did...and they're determined to make Heather pay.

I was drawn to this book by the title and the summary. I could not wait to get a copy of this book to read. Therefore, when I did score a early copy; I was so excited. Sadly, this book did not do it for me. I recognized this early on but kept reading hoping that the story would get better.

The legend of Red Lady was intriguing. It did have the "witchy" vibes. I could see where this story was going and it could have been really good. However, what was lacking was the emotional and character range of Heather and the other ladies.

I mean, Heather is being staked with her past secrets and she hardly reacts in fear. The past storyline where the girls were learning about the Red Lady was the only redeeming part of this book. Finally, there is the ending. It was "just ok".
Damien Angelica Walters