The Widow of Rose House 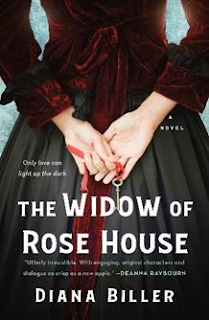 
It’s 1875, and New York’s Gilded Age is in full swing. After fleeing her abusive husband, Alva Webster spent three years being pilloried in the newspapers of two continents. Now he’s dead, and she’s returned to New York to start over, restoring Liefdehuis, a dilapidated Hyde Park mansion for her new home decoration book and hopefully her reputation in the process. So when the eccentric and brilliant Professor Samuel Moore appears, threatening her fresh start with stories of a haunting at her house, she refuses to give him access. Alva doesn’t believe in ghosts.

A pioneer in electric lighting and a member of the nationally-adored Moore family of scientists, Sam’s latest obsession is ghosts. When he learns about a house with a surprising number of ghost stories, he’s desperate to convince its beautiful owner to let him study it. Can he find his way into her house…and her heart?

This debut novel from author, Diana Biller is worth your time. Yes, the paranormal aspect of this book, is good but it was all about Alva and Sam. These two really made the book a treat for me. Their witty banter and Ava's bold attitude had me cheering for her.

She really could have just let all of the rumors beat her down but instead she rose above it to come out on top. It is her bold attitude that attracted Sam to her. Which, speaking of Sam; he is a bit of a nerd. An adorable nerd. His family are eccentric and a hoot. Good for some laughs.

I do agree with some of the other readers that the romance between Ava and Sam felt modern. The rest of the vibe of the story was not modern so this was a little of a take away form the overall story. However, the romance is good. I was feeling it between Sam and Ava. The Widow of Rose House is not to be missed!


DIANA BILLER lives in Los Angeles with her husband and their very good dog. THE WIDOW OF ROSE HOUSE is her debut novel.