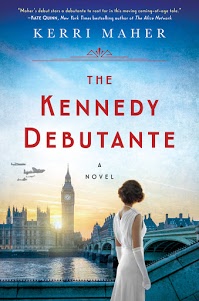 London, 1938. The effervescent "It girl" of London society since her father was named the ambassador, Kathleen "Kick" Kennedy moves in rarified circles, rubbing satin-covered elbows with some of the 20th century's most powerful figures. Eager to escape the watchful eye of her strict mother, Rose, the antics of her older brothers, Jack and Joe, and the erratic behavior of her sister Rosemary, Kick is ready to strike out on her own and is soon swept off her feet by Billy Hartington, the future Duke of Devonshire.

But their love is forbidden, as Kick's devout Catholic family and Billy's staunchly Protestant one would never approve their match. When war breaks like a tidal wave across her world, Billy is ripped from her arms as the Kennedys are forced to return to the States. Kick gets work as a journalist and joins the Red Cross to get back to England, where she will have to decide where her true loyalties lie—with family or with love.
About the author
Kerri Maher is also the author of This Is Not A Writing Manual: Notes for the Young Writer in the Real World under the name Kerri Majors. She holds an MFA from Columbia University and founded YARN, an award-winning literary journal of short-form YA writing. For many years a professor of writing, she now writes full time and lives with her daughter in Massachusetts where apple picking and long walks in the woods are especially fine.


I liked this book. Instantly, I was transported back in time. Kick had a bit of a rebellious side to her. Billy had charm. Together they were good together. The way that this book is formatted into several different parts (Spring and Fall 1938, Summer 1941, Summer 1943, and Winter 1944) is nice. Reading this book, I could see the progression from the different seasons and times.

While, the first couple of parts were nice; it was the later parts where the story really picked up. You could call it the "meat" of the story. By this time I had found my groove and built the connection with Kick and Billy. Yet, the other characters were fine. I could not connect as much with them. Kick's family are ones that I didn't like as much. Overall, this book is a nice time period read.

I have 1 copy to giveaway. US only. Please leave a comment with your email address. Winner chosen Oct 5th.
Kerri Maher

traveler said…
This captivating novel interests me greatly. The era and locale sound very interesting and memorable.
October 2, 2018 at 7:47 AM