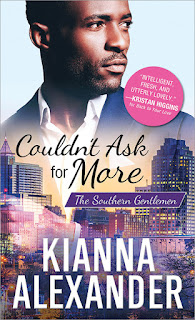 Fake engagements are a dangerous business.

Bryan James’s job is on thin ice unless he can secure a contract with a popular design house. He knows his best friend’s sister can help—but her terms are more than he bargained for.
Alexis Devers’s debut fashion line is a hit. But when Alexis’s publicist tells buyers that it landed her a wealthy, gorgeous fiancé, Alexis needs to come up with one—fast. Bryan’s offer to strike a deal is perfectly timed. She’s more than willing—on one condition…
It’s the perfect plan…until feelings start getting in the way. Suddenly, the dangers of mixing business and pleasure become much more real than either of them expected.
Amazon:              amzn.to/2JRLy81
B&N:                     bit.ly/2JQuOOK
Apple:                   apple.co/2DsUYcg
Kobo:
IndieBound:       bit.ly/2JRbK2P 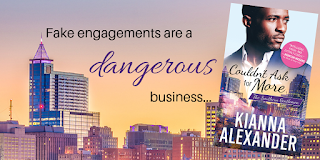 Bryan and Alexis talk business, with a little flirting.

Taking a moment to compose himself, he followed her down the hall. He always gave himself something of a silent pep talk before a presentation, but that tradition was quickly quashed as his eyes landed on her shapely backside moving a few feet in front of him. There wasn’t much else he could do but take in her magnificent “rear view.”


He inhaled deeply, breathing in her scent. She smelled of citrus and flowers, clean and enticing. The confines of the hallway seemed to magnify the fragrance. The scent was familiar and comforting, like the refreshing scent that hung in the air after a spring rain. He smiled at the thought. He hadn’t spent much time with her yet. But being in her presence seemed to refresh him as well.


They entered her office, where the pastel theme continued. Instead of modern art, though, framed sketches were displayed on the walls of the space.


She gestured to the chair in front of her desk. “Have a seat.”


He did as she walked around to the other side of the desk to claim her own seat. Still admiring the sketches, he asked, “Did you do all of those?”


She nodded. “I did. Sydney, my partner, has some sketches up in her office as well.”


“They’re very impressive. You’re a talented designer.” Bryan’s eyes swept over the sketches once more before returning to her face. “You look skeptical.”


“You did come here to make a pitch, so…” She paused, gave a little shrug of her delicate shoulders. “Let’s just say I’m a little jaded.”


“Trust me. I wouldn’t have complimented you if I didn’t mean it.” He held her gaze a few beats, hoping his expression would communicate his seriousness. If they were in a different setting, he’d be complimenting more than just her skills as a designer.


A ghost of a smile lit her beautiful face. “Thank you.”


He slung the briefcase onto his lap, opening it. “I know you’ve got other things to do, so do you mind if I go ahead with my presentation?”


He cleared his throat, loosened the Windsor knot in his tie. “Let me start by telling you that Royal Textiles is the largest, most efficient clothing textile manufacturer in the southeastern United States. What sets us apart from our competitors is our dedication to excellence.”


“We don’t make rugs and curtains and tents. Our sole focus is on apparel manufacturing, and we put our absolute best into it. We have only the most state-of-the-art equipment and the most highly trained technicians working on our factory floor.” He handed over the materials he’d brought, two brochures and a full color booklet, for her to peruse. “You should also know that we’ve been honored for quality by both the American Council of Textile Production and the International Apparel Society.”


“I’m impressed.” She looked through the material, addressing him as her eyes scanned the glossy paper. Her expression was difficult to read. “Okay. So tell me about the most recent apparel line your company has acquired a production contract for.”


He straightened in his seat, holding eye contact with her. “We recently started manufacturing J. Cole’s denim line. The first pairs of jeans rolled off the line in the past two weeks.”


Her lips curved, and she appeared impressed. “Sounds good. There isn’t any denim in the Krystal Kouture One line.”


One perfectly shaped brow lifted. “And how is that? My partner only sent out promotional items to the retailers.”


“I have connections in retail. A friend of a friend let me take a look at your materials.” He leaned back, tenting his fingers. They’d reached the juncture of his pitch where he needed to appear casual but still show that he was serious about closing the deal. “Like I said, I think you have a lot of talent. As a textiles guy, I’m also mindful of how regional weather patterns can affect buyer expectations, especially in women’s wear. You have a good variety of pieces, and they’re sized right as well. I can see the appeal of your line for women all over the country.”


Closing the booklet, she set it aside. Lacing her graceful fingers, she placed her hands on the top of her desk. “I see you’ve done your homework. And I’m impressed with everything you’ve shown me.” She gestured to the stack of paper he’d given her.


A smile crossed his lips, and he clapped his hands together. Reaching into the open briefcase, he started to extract a preliminary agreement. “Wonderful. To get started, all I’ll need is for you to fill this out.”


She blinked a few times. “I’m sorry, I think you misunderstood me. I’m impressed, and everything looks good. But I have to take this up with my partner. I’m not going to make a decision, especially not one as major as this, without speaking to Sydney first.”


He tucked the agreement back inside, snapped the briefcase shut. “I understand completely.” Inside, he could feel the disappointment welling up inside him. He’d expected to win Alexis over with his brilliant presentation and return to the office with a signed agreement. Now, he’d have to go back empty-handed. While that wasn’t the outcome he’d hoped for, he did respect Alexis’s regard for her business partner. They were obviously a tightly knit unit, and he could see that reflected in Alexis’s manner and her words.


“We’ll get back to you with our decision by Monday at the latest.” She let her gaze travel over his upper body, then back to his eyes. “Is that acceptable?”


“That’s fine.” This time, his brow hitched. Was she just checking me out?