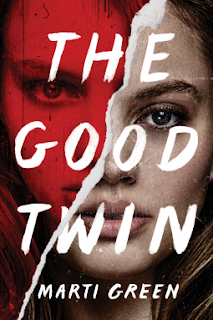 Mallory Holcolm is an unfulfilled waitress and aspiring artist living in a Queens boardinghouse when she learns something astonishing about her past: she has an identical twin sister named Charly she never knew existed.

Charly is a Princeton graduate, a respected gallery owner, and an heiress married to her handsome college sweetheart, Ben. Charly got everything she ever wanted. Everything Mallory wanted, too. And now it might be easier than Mallory ever imagined. Because Ben has reasons of his own for wanting to help her.

It begins with his startling proposal. All Mallory has to do is say yes.

But as their devious plan falls into place, piece by piece, Mallory learns more about her sister and herself than she ever meant to—a discovery that comes with an unexpected twist. A chilling deception is about to become a dangerous double cross. And it’s going to change the rules of Ben and Mallory’s game to the very end.

In regards to a psychological thriller; this book was "fine". There were no big shockers or moments that left me with goose bumps. However, this was still an good read. Who knew that "two minutes" could make such a difference.

What I lacked and craved was some mystery or at least intensity. There wasn't build up to Mallory and Ben's plans. Additionally, when it came to Ben, he was a slimly man, who had whatever was coming to him. As far as Mallory was concerned; I felt a little sorry for her as she was a good person but just caught up in a world that she could only dream of. There was not much know about Charly, other than what Ben spoke of her. So it was hard to tell if she actually deserved what Ben and Mallory were planning against her.

When it came to the ending, it was predictable. Overall, though a easy and quick read. I would read another book by this author.
Marti Green