I am Justice + Giveaway 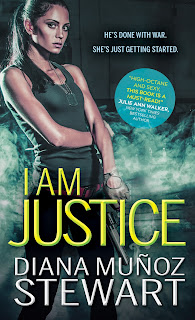 Title: I Am Justice

This bad-ass band of sisters plays for keeps.

She's ready to start a war


Justice Parish takes down bad guys. Rescued from the streets by the world renowned Parish family, she joined their covert sisterhood of vigilante assassins. Her next target: a sex-trafficking ring in the war-torn Middle East. She just needs to get close enough to take them down…

Diana Muñoz Stewart is the award-winning, romantic suspense author of the Band of Sisters series, which includes I Am Justice (Sourcebooks Casablanca). She lives in eastern Pennsylvania in an often chaotic and always welcoming home that—depending on the day—can include husband, kids, extended family, friends, and a canine or two. When not writing, Diana can be found kayaking, doing sprints up her long driveway—harder than it sounds–practicing yoga on her deck, flying, climbing, or hiking with the man who’s had her heart since they were teens. Find Diana at www.dianamunozstewart.com. 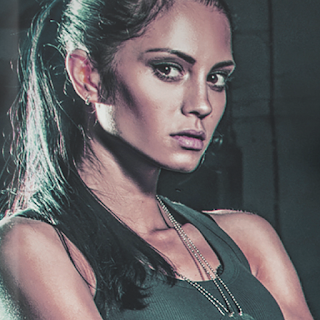 Standing in the ornate bar, only half-full of patrons, with music playing softly, Sandesh felt Justice’s sultry invitation to dance run down his body like a hot finger.


He couldn’t control the hungry leer that traveled the silky, blue dress that spanned her body, her hips, and the satisfying curve of a great ass like a warm hand.


Damn, he wanted to rest his own hand against that fine ass, pull her to him. The short, midnight-blue dress showed off sun-drenched legs. Her nipples pressed against the deep-blue hue and stood at attention under the drape of fabric that swooped and rested against her breasts.


A grin that announced the game was won and dinner was ready all in one lazy, long predatory stretch. Part of his body throbbed in response. The rest of him was pretty damn annoyed.


Wasn’t she the one who had suggested they keep it PG? Was she playing games?


Justice’s eyes, soaked in velvet onyx and framed by midnight lashes, narrowed. “Okay, I give. You eat me up with your stare and then you hesitate. What is it with you? Do you have something against strong women?”


Sandesh snorted. “For someone so direct, you are seriously clueless.”


His fingers left the edge of the cold espresso and sought out her hand. He needed to feel all of that energy and fire pressed up against him. “Okay. Let’s dance.”


She didn’t resist. Another surprise. She’d taken his hesitation personally. He’d thought she’d make him pay for that. But she didn’t. She simply bequeathed him with a that’s-more-like-it smile. Seriously, this woman was scorching hot.


“At this Moment” by Billy Vera and the Beaters played through the speakers. Not what he would’ve expected here.


He pulled her to him as they hit the empty dance floor. She curved into him, drawing a sound from his throat that was as involuntary as breathing. She purred into his ear.


His hand slid along the silk fabric of her dress, down her back to her smooth, round, and hot-as-hell ass. And there he went. Zero to sixty. He cleared his throat. “One?”


She ran a tongue over his earlobe and inside his ear.


That warm, wet stroke sent tremors zinging low into his body. Her sultry voice meshed with that teasing tongue and vibrated through him. “I’m counting how many different ways I can get you to moan.”


He growled, a raw, desperate sound that even to his own muffled ears sounded like raging intent.


Okay. Definitely time to divert the conversation. Complex math, anyone? Or a subject destined to slow down any hot moment. “Have you spoken to your mother about our progress here?”


She laughed, as if she could see him wrestling control from the moment. She moved her mouth close enough that he could feel her breath on his neck. “No. But I’d like to meet your mother. You’ve met mine. It’s only fair. What’s she like?”


“She’s been sick for a few years. Early-onset Alzheimer’s. She’s at a care center. I have friends and family scheduled to sit and read with her every night I’m away.”


“Oh. I’m sorry.” She looked past him for a moment, then returned her gaze to his. “So what you’re telling me is that while you’re away on your humanitarian mission, you’ve organized it so your mother will always be watched over by a close friend or family member. You do realize I already want to sleep with you. You don’t have to sweeten the pot.”


He laughed. Only this woman would think talking about his mom—meant to cool things off—was sexy.


“Sandesh, I’m serious.” She began to roll her hips.


His eyes rolled back in his head.


That. Felt. So. Fucking. Good. Nothing like a violent hard-on to give a woman the upper hand. Her hand. His hard-on. Settle. Settle.


His lips came down on hers. There was an instant and overwhelming zing of electricity. Mindless of where he was, he tasted her, tickled, and teased her mouth open. Her wet response, the moan against his lips as his tongue played back, caused fire to erupt down his body.


Dubdubdub, dubdubdub, pulsated through him. He couldn’t tell what throbbed faster—his cock or his heart. He deepened the kiss. She opened wider, accelerated the roll of her hips.


Time to go. Time to get her off the dance floor and into his bed. Or her bed. Which room was closer?


The phone in his pocket buzzed. Justice stiffened in his arms. She pulled her sweet mouth away. “You should answer it.”


He tightened his grip on her. He ran his nose down her face, inhaled her lavender-warmed-by-the-sun scent.


Oh. Shit. Not happening. He looked into her eyes, her endless depths, midnight-and-mystery eyes. She was serious.


He answered the phone. It was Salma. The tremor in her voice doused the fire in his body. A tsunami would’ve had less impact.


“Sandesh, please, I need your help.”